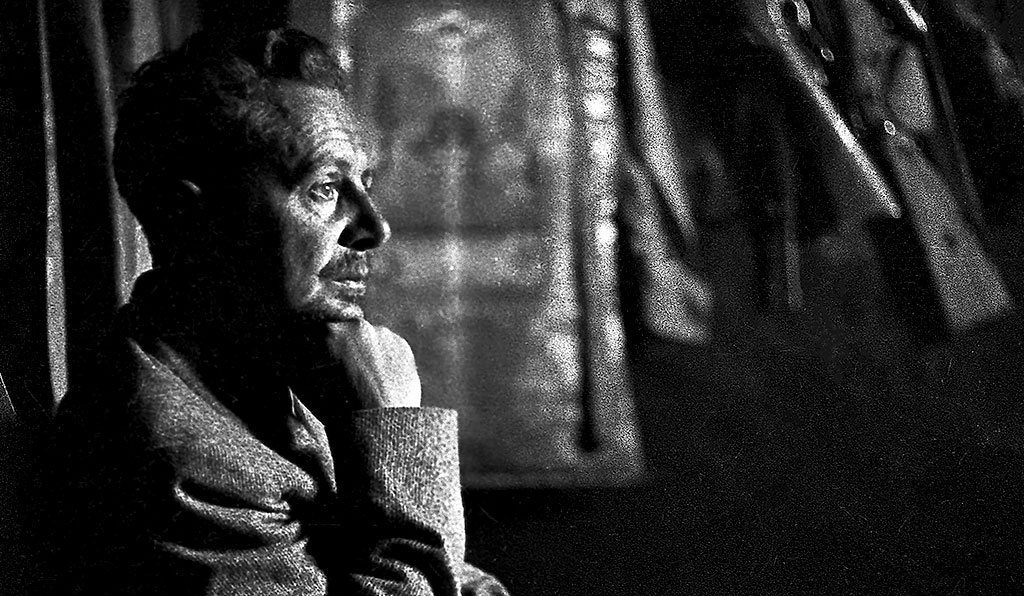 Posted at 12:37h in Others, Uncategorized by Renzo Freschi - asian art 0 Comments

This article was published in 1938 in the magazine Valori Primordiali (Primordial Values) directed by Franco Ciliberti, an intellectual and teacher of History of Religions who enlivened the Roman and Milanese artistic communities in the 1930s. The journal mainly dealt with new artistic movements such as Futurism and Rationalism in architecture, but it also supported the idea, typical of Fascism and many dictatorships, of changing society through the rediscovery of “primordial values”. Ciliberti asked Tucci to write this article probably because both had an interest in religions, and “Man in Buddhism” was a theme in keeping with the journal’s editorial line of searching for “Primordial Values”.

The West has traditionally considered Buddhism as the religion of nothingness: a renunciation of life and its struggle, a cosmic suicide by virtue of which, in a pall of suffering, all appearances dissolve into nirvana. However, few asked themselves if this nothingness was not indeed the fullness of being, or the very essence of being as opposed to the flowing of forms, eternity versus time. Nothing can be created on nothing, no philosophy, no religion, no civilization. But it is with Buddhism that man in India seems to become aware of his power and of his infinite abilities which place him above all gods. Lord of the earth and of the skies.

That error of perspective was due to the monastic interpretation of Buddhism which Western philology had taken at face value. And yet religion does not live in monasteries, but in the crowds. It does not prosper in churches, but in the spirit of the faithful – an amorous and harmonious correspondence between the eternal and the temporal by which revelation passes into life, and God almost seems to gain from the experience of this mankind that laboriously, day by day, discovers new horizons both within and without itself.

It was not the Buddhism of monasteries that conquered Asia, but that peculiar Buddhism which softened through contact with suffering men, and which replaced the ascetic’s personal salvation with compassion and empathy for all that lives – for where there is life there are suffering and the inexorable distress of death. The West discovered man through science, India discovered him through suffering. And in India man recovered awareness of himself as a suffering being who knows he is suffering. Only then does he cease to be an abstraction and become a person. In the experience and awareness of his sorrow man joins a brotherhood; he no longer thinks of himself, but he is ennobled in the ardor of a universal love, in the sweetness of an empathy embracing all the miserable and suffering beings. Man then comes down from the cold skies of theology to the reality of daily life. Not only does Buddhism conquer the Indian crowds, it also becomes apostolical. Its missionaries climb mountains and sail the seas in order to spread their word of love. The monk of early Buddhism becomes a Bodhisattva, i.e. man-god. Man-god because man is sublimed into spiritual heights which the gods themselves cannot attain, above all because he is a creature of love – love that means self-sacrifice for oneself and the others. Love is the statement of one’s own humanity through self-renunciation, an aspiration to eternity which remains voluntarily unattained, for the desire to save others goes through one’s own suffering. With this new ideal India is moved to pity. Its thought had reached the highest speculations, but had negated man, who was not even the shadow of a dream, just the shadow of an error – a cosmic, fatal error, darkness which only enlightenment can dispel with its flashing light. Such a new concept of man causes a revolution in life and culture. India opens up to foreign influences, it accepts and assimilates every human experience. 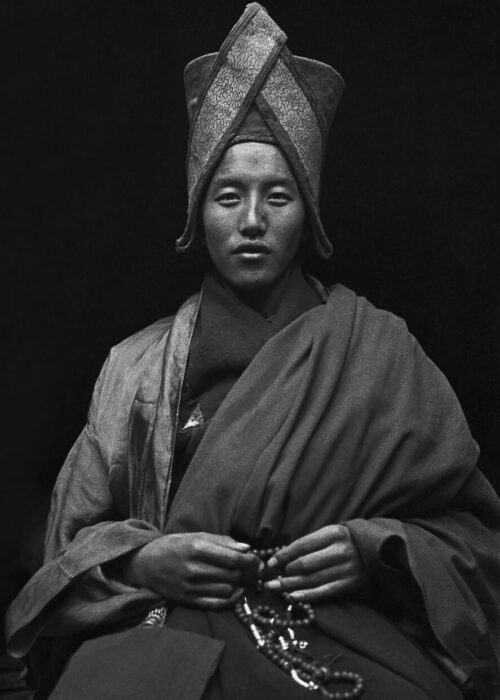 India’s contact with Alexander’s and his successors’ Greece gives its constructs a clearer and more defined shape. The Bodhisattva is not just someone who loves and sacrifices himself, but also someone who fights – a hero, a warrior in body armor, armed with that perseverance without which no fight can be won. It is a hard struggle against the most formidable enemies, those living within ourselves, which were born with us and which we inherited as companions from that great mystery that was emptiness and which originated life. This struggle against the forces rising from the abyss of the individual and collective unconscious needs just one weapon: concentration. Man must not be distracted, he must not look outwards but inwards. He must not let himself be dominated by passion, he must overcome passion. And so the artistic type of the Buddha and of the Bodhisattva is born, the eyes looking inside, not outside, the expression concentrated and serene, like a clear sky after the storm. Around these figures the tumult of life is not negated or condemned, but accepted and pacified: large crowds pray, rejoice, fight, and like waves of life they break around these heroes of sanctity who seem to belong to another world. And the Ajanta painting was born, not hieratic, conventional, abstract, but alive and tumultuous; possibly overelaborate like everything in India: the jungle on the earth is often mirrored in the creations of its spirit, with all the contradictions, contrasts, incongruities of a much too luxuriant growth. Along with sculpture and painting, poetry too is revived. No longer epic or mythological drama, it is not the lyricism of the ancient chants of monks and nuns either, in which primitive Buddhism had indulged in contemplative abandonment. It is Asvaghosa’s and Aryasura’s poetry in which man’s weaknesses and achievements, his contrasting good and evil, constitute the dominant note.

What strikes in this poetry is its humanity and its participation in suffering which render it so sensitive to life’s voice and so close to our soul. Dogmatics can demonstrate that the individual does not exist – that it is a ghost created by false thinking – and it can break it and obliterate it into a series of mental states. Buddhism can never forget that its master had preached love, and love gives life, substance, and reality even to a ghost. Man is not saved by knowledge alone, but by love and living for the others. With its humanity no longer respecting any divisions of caste and race Buddhism crosses the boundaries of India: it conquers Central Asia, China, Tibet, Japan, Indochina and Malaysia – a mission that not only redeems man, but spreads the noble truths of Buddhism and also an identical vision of life to all regions of the East and Far East. 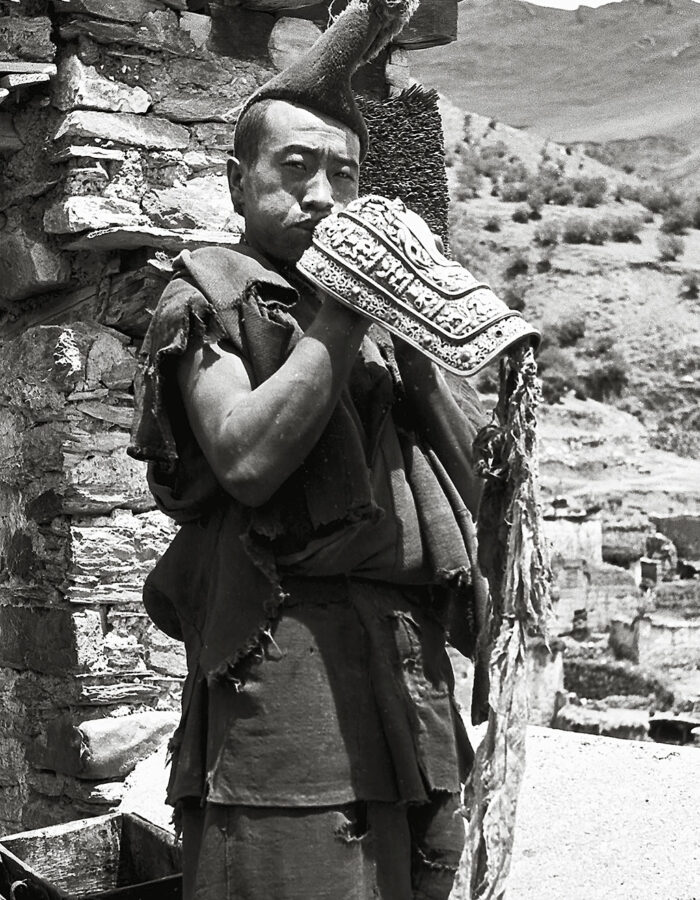 As soon as Buddhism begins its civilizing expansion, geographic and historical barriers that separated people seem to fall. Each culture is vivified by contact with other cultures: the dialectical and philosophical subtleties of India accustom Chinese thought to a deeper and more comprehensive study of the fundamental questions. And it is Buddhism that will bring civilization and political cohesion to the Tibetan and Mongol nomads and then, crossing the East China sea, will fill Shotoku Taishi with enthusiasm and will introduce a new kindness into the Japanese soul, which will later result in magnificent artistic creations and in noble life works.

Buddha’s word spread throughout Asia bringing with it the Indian idea of life and Indian culture: so India experienced what ancient Greece and renaissance Italy had experienced: namely that its thought was transplanted outside its boundaries inspiring and giving life to a sort of spiritual oikoumene which from the mountains of Iran and the Arsacid court (Ngan sci Cao) extended all the way to the Pacific Ocean. And since it was often colonies that settled in remote regions and eased cultural exchange and penetration of religion, ideas, and art in India, we are justified in talking of a Magna India inspired and supported in its spiritual conquests by the lifeblood of Buddhism.

But the man who took shape from this concept of life – originated in India with Buddhism and later amalgamated with that of Taoism, which is the noblest jewel of Chinese thought – is not the same man whom the West formed with its never-ending strife. This man does not oppose nature in a dualism which fills our life with tragic pathos and with such heroic bravery. In the East this man fraternizes with the things that live and die in the alternating flow of the universe, with animals, plants, mountains, waters, and therefore he feels deep and unexpressed spiritual affinities with the fleeting appearances of cosmic becoming. Not inaction, but rather impersonal action, action in which the eternal replaces the temporal, and the individual is silent but lives in the all. But only in man is this redeeming conscience present, alive, and functioning. The gods no longer exist in a world of ghosts, or they only exist as ephemeral projections of our imagination not cleansed by gnosis. Only in man does cosmic awareness – this indiscriminate light which created order from chaos, which is formless but is the mother of all forms – reveal itself to itself, burning the darkness of ignorance with its glory. Only in man is there the possibility of salvation, but only in man does the divine incarnate to reveal the truth. “Man – sings Candidas – is above all things and nothing is above him”.