Almost fifty years have passed since I arrived in Kabul in 1970 and more than forty since I opened “Mandala”, my first shop in the heart of medieval Milan. My story has been full of curiosity, trips, discoveries, love for the places I visited and respect for the cultures I came into contact with; ethnography and folk art initially, then ancient art, archaeology and classical art, followed by photography and contemporary art.

All Asian of course.

I personally shot all the photographs you see.

a dealer-by-chance captivated by the spirit of Asia.

This article has been published in “Il Foglio” (February 2003), a political newspaper that dedicates its Sunday issue to biographies and photographs only.” (All photographs by Renzo Freschi.).

Renzo Freschi runs a gallery of Oriental Art in Milan, in the Quadrilatero—the area delimited by via Montenapoleone, via Senato, corso Venezia and via Manzoni. Not everyone in Milan knows what the Quadrilatero is. It is better known by the shopping nomads in Tokyo and Los Angeles. It is the area where shops can boast the highest cost per square metre in the world (apart from Tokyo). It is the district in which stylists have replaced almost any other type of business. Antique shops used to be numerous, now only the fittest survive, those in which the old tradition and the loyal customers still allow coping with the mind-boggling running costs. Freschi, who stepped into the Quadrilatero when many other antique dealers and owners of art galleries had already fled, got to this profession by chance.

At the end of the Sixties he is a student of philosophy at the Statale in Milan; his only prospect is to become a teacher, and he is depressed by the idea. There is growing restlessness and ferment around. Freschi feels the uneasiness but he does not share the enthusiasm. While others join the international demonstrations in Berlin or Cuba he is off to Afghanistan. He is no pioneer, the pioneers were the Australian youngsters who took advantage of the opening of Afghanistan by Zahir Shah to make the long journey by sea and by land as far as Great Britain and Ireland, where their grandfathers had come from. There is something like a scheduled line to Kabul now, it is the Magic Bus leaving from Amsterdam for the Land of Dreams. Freschi travels alone. He sets out on a train dreamers still call the Orient Express, but realists have renamed the Horror Express. One must change in Istanbul, the train then goes as far as Mashad, the holy city of Khorasan. From there up to the border of Afghanistan and beyond the choice narrows down to coaches and lorries. Sometimes the lorries and coaches overturn along the road. The passengers squat down and exchange stories waiting for fate to take its course. There are Tajiks and Pathans, Uzbeks and Persians. Some wear a piece of cloth as a turban, others a round felt beret, some have slanting eyes and a small round nose, others an aquiline nose and deep eyes. Freschi begins telling them apart by their dress, by their facial features. It is like being plunged into the Middle Ages, a contact with something undefiled. The landscape colours change, the people are friendly if one adapts to their customs. Freschi is entranced. In the caravanserais, after an exhausting day’s journey, waiting for the next coach to take him further away, he shares with them his canned food and condensed milk. It is difficult to tell where ordinary poverty ends and exceptional poverty begins, the consequence of a famine that has been going on for years.

The summer draws to an end and the philosophy student should go back to his studies. He buys some handicrafts—bracelets, necklaces, cloth—which he sells to his friends in Milan, but he cannot fall back into the rut. He borrows some money and he is off again, this time by plane. He has never set foot on a plane, he is terrified. He feels sick during the flight, he wishes he could die and he swears he will never fly again. In time he will make a virtue of necessity.

This time in Kabul he has the good luck of chancing upon one of the rare occasions in which the tribes offer the king a buskashi. Buskashi is a sort of rugby on horseback in which the riders playing in teams contend for the body—alive at first, then a shapeless gory mass—of a goat. Spurring the players is not just the spirit of competition, but ethnic rivalries as well. People have come from all parts of the country. It is a mélange of shouts, blood, spices, prayers, dances. Freschi no longer feels an onlooker, he is opening up to a different perception of life.

To pay for the trip to the remote valleys, or to finance their reckless passion for gambling common to all ethnic groups, the Afghans sell everything they own, even their horse or the faithful rifle. Even more freely they sell the badly-tanned skin jackets and the finely-worked silver jewels arriving by way of long and winding routes from all Central Asia. Freschi knows that to come back again he must pay his way.

Meanwhile, he fills 13 trunks with merchandise; and bus after bus, customs after customs, seizures after seizures, attempted theft after attempted theft, he crosses Iran, Iraq, and Turkey, until finally in Yugoslavia where the border authorities forced him to send the goods by train to Italy.

He buys what he believes he can sell in Milan, he fills thirteen big suitcases and, in a long sequence of coaches, customs, seizures, and attempted thefts, he crosses Iran, Iraq, Turkey, until in Yugoslavia he is forced to ship the goods by train. He fears everything is lost, but on 20th December, just before Christmas, his treasure arrives in Milan. Jewels, costumes, embroideries of all the various Afghan and Kazak ethnic groups are sold on the spot. So he can leave again, driving a deux-chevaux with his cousin. On the mountains of Anatolia it is so cold that he has to light a fire under the engine in order to prevent water freezing in the radiator. From Kabul they take a coach due north: Mazar i Sharif, Balkh, once hosting the largest covered bazaar in the world, Amqcha, the only market for Turkmenian jewellery.

More and more intrigued by the East, he begins travelling across India and Nepal. Along the triangle Kabul-Kathmandu-Goa the hippies are his companions, but they live in their communities, going from one party to the next and getting stoned, whereas Freschi mixes with the crowds. To him the contact with this way of living and thinking is far more exciting than any chilum. But he is a practical lad too: while he “grows, explores, understands” he buys ethnic material. So in 1976 he opens a small shop in Milan. The next year he organises his first thematic exhibition, with a consistent choice of exhibits.

“My knowledge gave me a deeper understanding of the people and of their traditions, and I transmitted this to my public, who grew up along with me”. In 1980 he is in central-western Nepal. After weeks walking in the monsoon rains, on paths sliding down under his feet, he reaches the summit of Kalingchok (3800 m), where the Full Moon Festival of Saun (the month of July) to celebrate the Mother Goddess is in full swing. The valleys resound with the rhythm of drums, a procession of shamans arrives, their wide cassocks spreading out like wheels as they dance, wearing seed-necklaces, snake vertebrae, eagle and hen feet around their necks.

They start spinning round on the edge of the precipice where the sacrificial altar is placed. Hundreds of pilgrims of different races and religious beliefs throng to get to the top, singing mantras and carrying cocks, goats, flowers and rice for the ritual. Freschi catches the highlights of the festival with his camera, he interviews the shamans: he will return the following year.

The pictures of his Nepalese adventure deck the walls in his office, a chaos of books and papers everywhere: there are intense portraits, slanting eyes and prominent cheekbones, sumptuous costumes, even those of children, with embroideries, inserts of brocade or stones. It seems odd that people who do not have enough to eat can afford such luxury, but this is the only way, together with the festivals, to keep their identity.

He visits temples, museums, he studies, meets experts and dealers. He decides to gather material for an exhibition. In the bazaars of northern India he finds cult bronzes, so old that they are cast off from the temples. With a relatively modest sum he puts on an extraordinary exhibition. He sells almost everything.

At last he can move to a nice shop in the really posh area of Milan. He furnishes it with minimalist elegance in a pearl-grey, almost transparent tone. Indian deities fill niches and plinths, sprinkled with embedded lights.

Unfortunately, he now spends less time travelling, for the bureaucracy is pressing and bills must be paid, but as soon as he can he sets out for the East again. He walks down the ancient Silk Route that linked India to the Mediterranean and to China, he stumbles upon a “revelation”: the excavations in Swat and the civilisation of Gandhara. “From remotest times Persians, Greeks, Indians, Parthians, Scythians and Kushanas have clashed and mingled in these regions. With Alexander the Great the Hellenic presence is reinforced; under his successors Indo-Greek kingdoms spring up which will produce a unique art in which the Hellenistic aesthetic tradition provides the form, and Mahayana Buddhism is the content. When the art of Gandhara is discovered in the West it is like being faced with the remains of a mythical civilisation, like that of Atlantis”.

He shows me the torso of a bodhisattva. The drapery seems to have been stolen from the Nike of Samothrace, but the pose is rigorously frontal, the only dynamism being provided by the sideways thrust of the hip. This is one of the first pieces he bought, and despite some very attractive offers he would not even consider parting with it. Since then, sculpture has been his passion “even though it is imperative that these statues are imagined in their context, that is along the walls of a temple, a bit like in our Gothic cathedrals”. This ushers in a season of great exhibitions, ranging from ancient Indian to Tibetan art, down to Chinese archaeological finds, the great success of the last few years.

Freschi explains why: Chinese ceramics are beautiful and easy to come by, which allows a relatively inexpensive approach to archaeology. Never has the quality-age-price combination been so good. He unites the work of the dealer with that of a cultural promoter, even if this is no easy task in Italy. The average customer mostly looks for objects to match his furniture, collectors are rare. It is much better with foreigners, they are more prepared and curious. Lots of them come from the nearby Four Seasons Hotel. 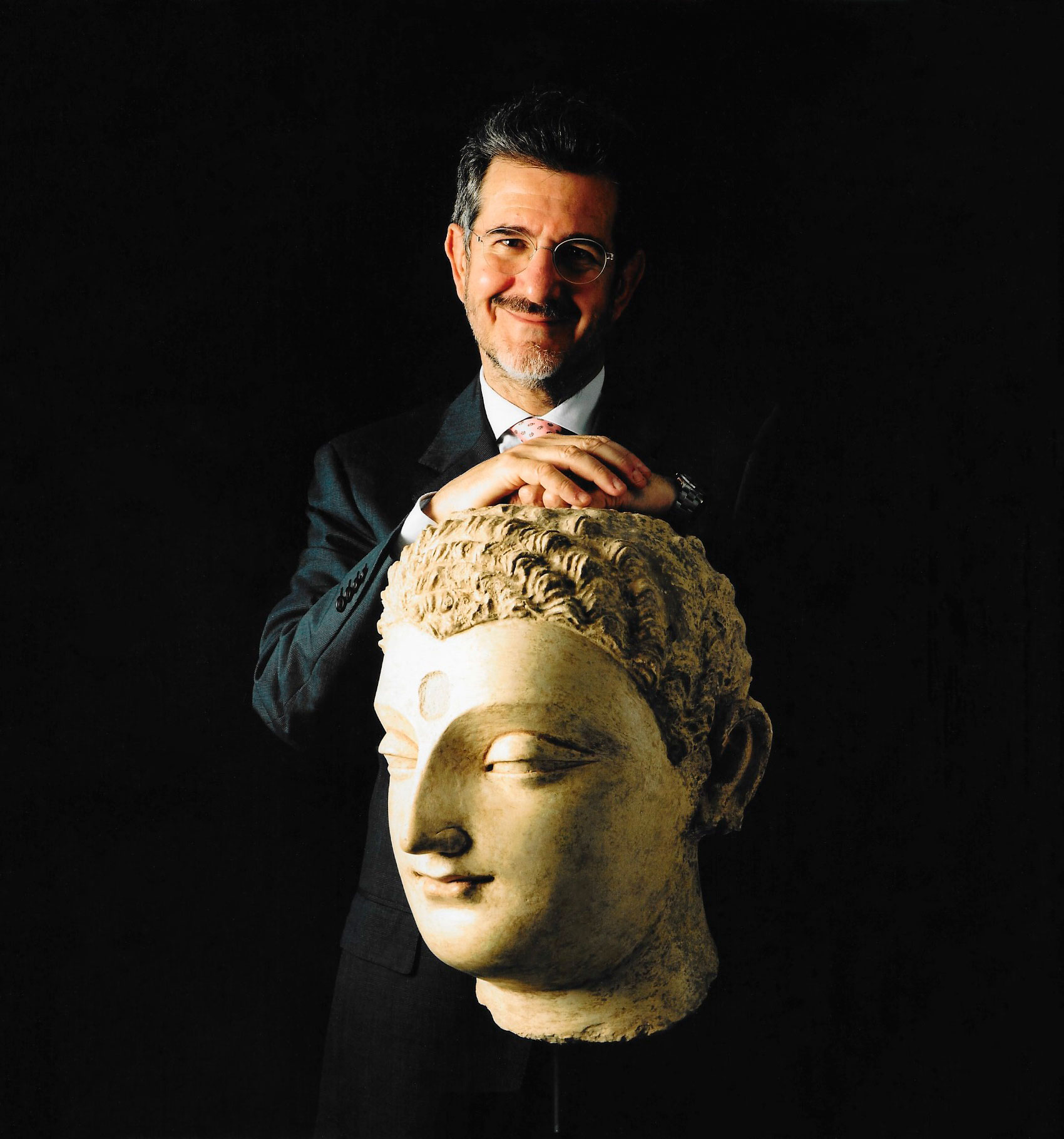