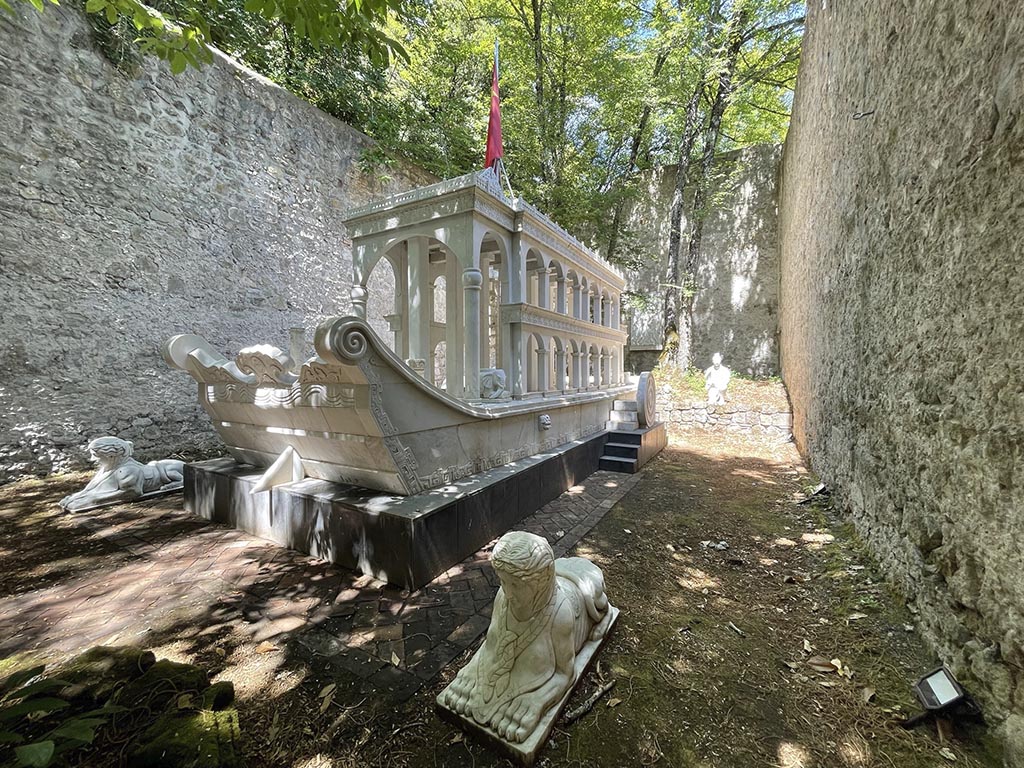 Posted at 11:10h in Others by Renzo Freschi - asian art 0 Comments

This might well be a gripping adventure story whose actors are the most celebrated protagonists of Chinese history in the second half of the 20th century, and yet all I am about to tell is true and really happened. The actors are Cixi (the ”Dowager Empress” who ruled China from 1861 to 1908), Mao Zedong (1893-1976), Zhou Enlai (1898-1976, prime minister and foreign minister), Puyi (1906-1967, the last emperor of the Qing Dynasty) and above all Eugenio Benedetti, one of those entrepreneurs who made Italian industry famous the world over after World War II.

However, the main character in this story is the all-marble boat which the Empress Cixi had built in 1895. At that time China was facing a decline, torn by the conflict between one side of the court supporting a modernization of the country and the other side clinging to an illusory century-long isolation. Whilst in favor of a gradual aperture, Cixi decided to use most of the funding designated for armament of the Navy to celebrate her 60th birthday with the construction on lake Kunming, next to the Summer Palace “Garden of Virtue and Harmony”, of a 39-meter long boat made entirely of marble, which she named “The Boat of Purity and Ease”. It took several years before the artisans completed the project, selecting the whitest and most luminous marble, shaping and carving it, thus creating a unique object which, despite the fact that it could not sail, became Cixi’s favorite place. 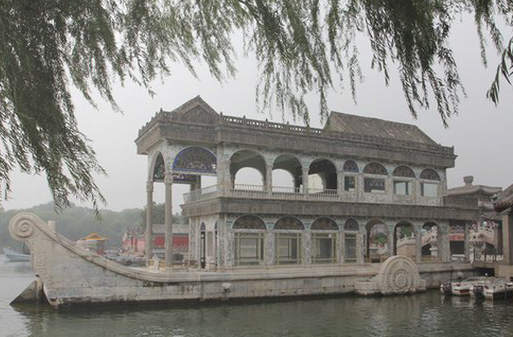 Years went by, the empress chose her successor, Puyi, the “Last Emperor” masterly described in Bernardo Bertolucci’s film, then she died and China began her ordeal of invasions by Japan, by Western powers, and also a long and devastating civil war. More years passed, Mao Zedong defeated Chiang Kai-shek (1887-1975) who took refuge in Taiwan, China became a communist nation laboriously trying to recover and to rebuild her economy. And lastly the 1960s came with the “Cultural Revolution” and the devastations the Red Guards inflicted on people and things reminiscent of a past to be erased. It was in those tragic years that Eugenio Benedetti entered the scene. In this story he might be called the “deus ex machina” who achieved the impossible. Bendetti arrived in Beijing in 1965 to sell the best Italian industrial machinery, as he had already so successfully done with the Soviet Republic, where he had become friends with Khrushchev. The only western guest in a desolate Beijing, he has a permit allowing him to go anywhere, and he discovers the famous marble boat built by Cixi in the Summer Palace. Enthralled by that peaceful place and by the white boat he often comes back to visit the pavilions, all bearing poetical names as is common in the Chinese tradition. One day he chanced upon a white-dressed figure with an aristocratic manner: it was Puyi, the last Emperor who had become a gardener in the Summer Palace by the will of Mao.

Benedetti and the “Son of Heaven” saw each other several times, and talked about the millenarian relations between China and Italy, which the Emperor had extensively visited. The entrepreneur feels he is a witness of History: in his eyes the boat represents the transition from the ancient China of the Dowager Empress to the present one of Puyi, last incarnation of a dethroned dynasty. So he decides to save it from a likely destruction by the Red Guards and asks the Revolutionary Government if he could buy it. His request is accepted, but logistical problems make transport impossible.

Benedetti goes back to work and is tasked by the Chinese Government to surface the roads along the ancient Silk Road connecting China to Nepal and to Pakistan, then Zhou Enlai, one of the most powerful men in the Communist Party, entrusts him with opening 34 marble mines in Hebei, where the material quality is similar to that of the Italian Carrara marble. Years go by but he is obsessed by the memory of the boat and he decides to have a 13-meter long model of it made, exactly one third of the original. The material is from the new mines and the workforce modeling it is the best available. Comprised of 3,000 interlocking pieces (100 tons) reproducing the Chinese original in every detail, it will take years to complete. 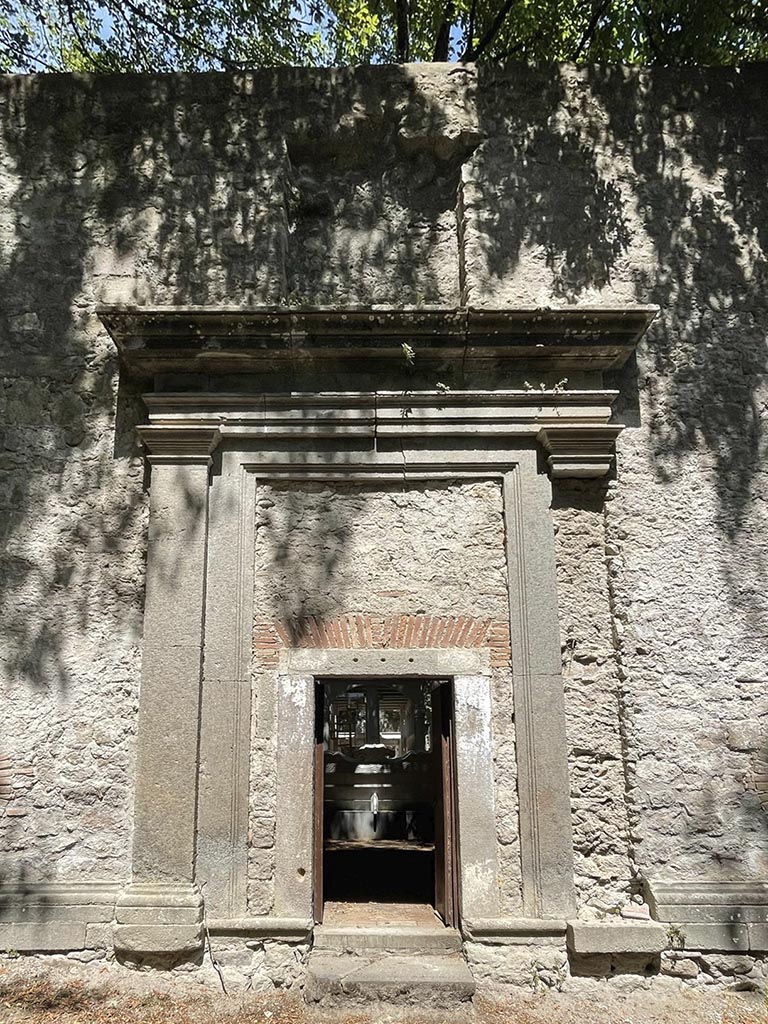 Meanwhile Benedetti buys a large wooded area on Mount Cimino near Viterbo, not far from Rome, where he discovers the ruins of an abbey built in 1150. The roof had caved in and seven trees had grown inside the building. The church had been a very active religious center, for a few centuries it had hosted Mother Mary’s hair which the Crusaders had brought back from Palestine, and a number of hermits had lived in caves in the mountain. Rubble was removed until the original floor was exposed, missing parts were reconstructed using the material found on site, but the trees were left standing and the church roof is now the sky. Benedetti feels that is the most appropriate place where the marble boat can be reassembled and decides that his ashes will be buried inside that boat which symbolically represents the achievement of a life dedicated to creating work and building bridges between Nations.

In 2010, after years spent restoring the church and assembling the boat, Eugenio Benedetti, whom Khrushchev nicknamed “the dove” finally inaugurates, in the presence of the Chinese ambassador, his perfect replica of the boat in the Summer Palace. It is even better than the original, since that had been damaged by the Red Guards. The trees at the four corners of the church are silent witnesses, and anyone who is lucky to see this marvel will be stunned. On the bow three sayings by Confucius can be read which Benedetti wanted carved as the meaning of his life: Act with Justice, Do your Duty, Work for the Good. 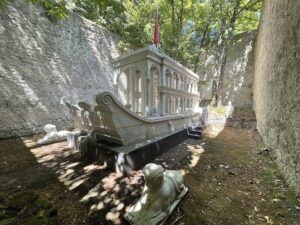 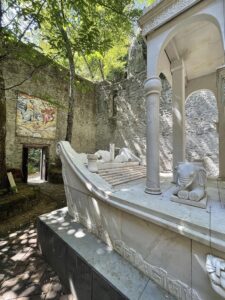 It was a friend who told me of the “Boat of Purity and Ease” on Mount Cimino. This sounded absolutely extraordinary and for a Milanese citizen like me to imagine that someone could achieve such a unique feat in the woods of a beautiful but little known region like Tuscia was unbelievable to say the least. After a bit of searching on the Web I finally made an appointment to visit the site of the boat, which can only be reached by a very rugged road in a private estate called Tenuta Sant’Egidio. 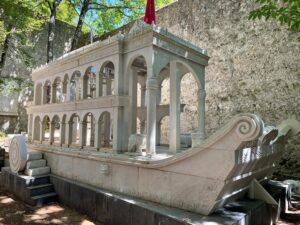 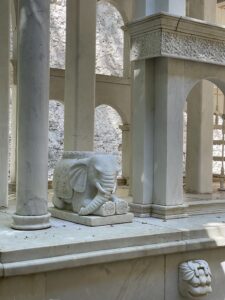 Gianfranco, Eugenio Benedetti’s son in law, was there to welcome me. His kindness is equal to his competence and love for the land he is in charge of, an estate of over 300 acres promoting environmental education. We were deep in the wood when I spotted the façade of what had once been the church of the Holy Trinity. A small iron door had been built within the large portal, and through that I caught a glimpse of the boat. It was midday, the sun shone on the gleaming marble, almost blinding in its purity of absolute white. There it was before my eyes, enclosed by the coarse stone walls of the church contrasting with the immaculate perfection of its shape.

I defy anyone not to remain gobsmacked, as in ecstasy in that place uniting uncontaminated nature, millenary history and the copy of a boat built by a ruthless empress who was also a fine aesthete, lastly reproduced to satisfy the dream of a visionary-patron who had penetrated the mystery of life in his often daring journeys. That place which Benedetti had faithfully reconstructed as it originally was and which contained a boat equally rebuilt like the original – meant as a repository for his ashes – seemed to me like an act of faith in this mystery. I was moved by what I saw, elated to be there, to be able to touch those stones which had soaked up prayers and devotion and to stroke that marble whose purity pierced thoughts and feelings. That was probably the peace which hermits and mystics had sought for centuries in that wood on Mount Cimino.