Paramount among the British artists who competed to fix on canvas and print the beautiful exotic views of India at the end of the 18th century are the ineffable Daniells—Thomas and William, uncle and nephew—for the accuracy of their images and the precision of lights and tones in their watercolours, later also aquatints. It took quite some courage, at that time, to face the dangers and hardships of those expeditions, all the more so when one of the two adventurers was just 15! Probably the two would have preferred to be remembered for their oil paintings, but it was the aquatints collected in the images of the six volumes of the monumental “Oriental Scenery” that brought them world fame. The most ambitious printing project in England, which took 13 years to be completed, ended in 1795 after nine years of expeditions to India.

Those expeditions of uncle and nephew, starting in 1785, set out by sea from Canton, Calcutta, Madras or Bombay, and each took several months. Relying on the best artistic material bought in England and on their iron constitution, the “Daniells” found in their boats not just an ideal means of transport and a safe shelter, but also the best way of easily carrying provisions, sedan chairs, carts and horses, sailors and servants, tents and above all the essential marvel of the time, the darkroom! With the photographs that came out of it they could then easily finish, once back in the UK, their sketches and watercolours, reproducing the original colours of the scenes they had painted.

Apart from the modest support they received from the government, the Daniells financed themselves by restoring other people’s oil paintings and through auction sales of their own works. Thus it was that their works depicting the busy streets of Calcutta teeming with life (1786), the majestic temples carved from the pure rock of Ellora (1793), the Fatehpur Sikri fortress, all red because it was made from the local red sandstone, the magnificent temples of south India and even the peaks of the Himalayas—when presented to the British public met with a remarkable success, for never before had mysterious India disclosed its secrets. However, the Daniells’ varied production—sketches, drawings, prints, watercolours and oil paintings—only attained world fame thanks to the sophisticated technique of aquatint.

This technique, more complex than etching, required indirect incision on copper plates with a matrix which printed controlled-intensty chiaroscuro tones with very fine graining; aquatint thus enabled obtaining, in its last stage, the whole range of original tones captured by the darkroom which watercolour was unable to recreate.

The images contained in the Daniells’ masterpiece “Oriental Scenery” could then be replicated in a series of aquatints which met with an unprecedented success, besides improving the knowledge of Indian history, geography, archaeology and architecture. Architecture had also launched a particularly exotic fashion in design, giving rise to an “Indian style” which was employed for some noteworthy English public buildings. 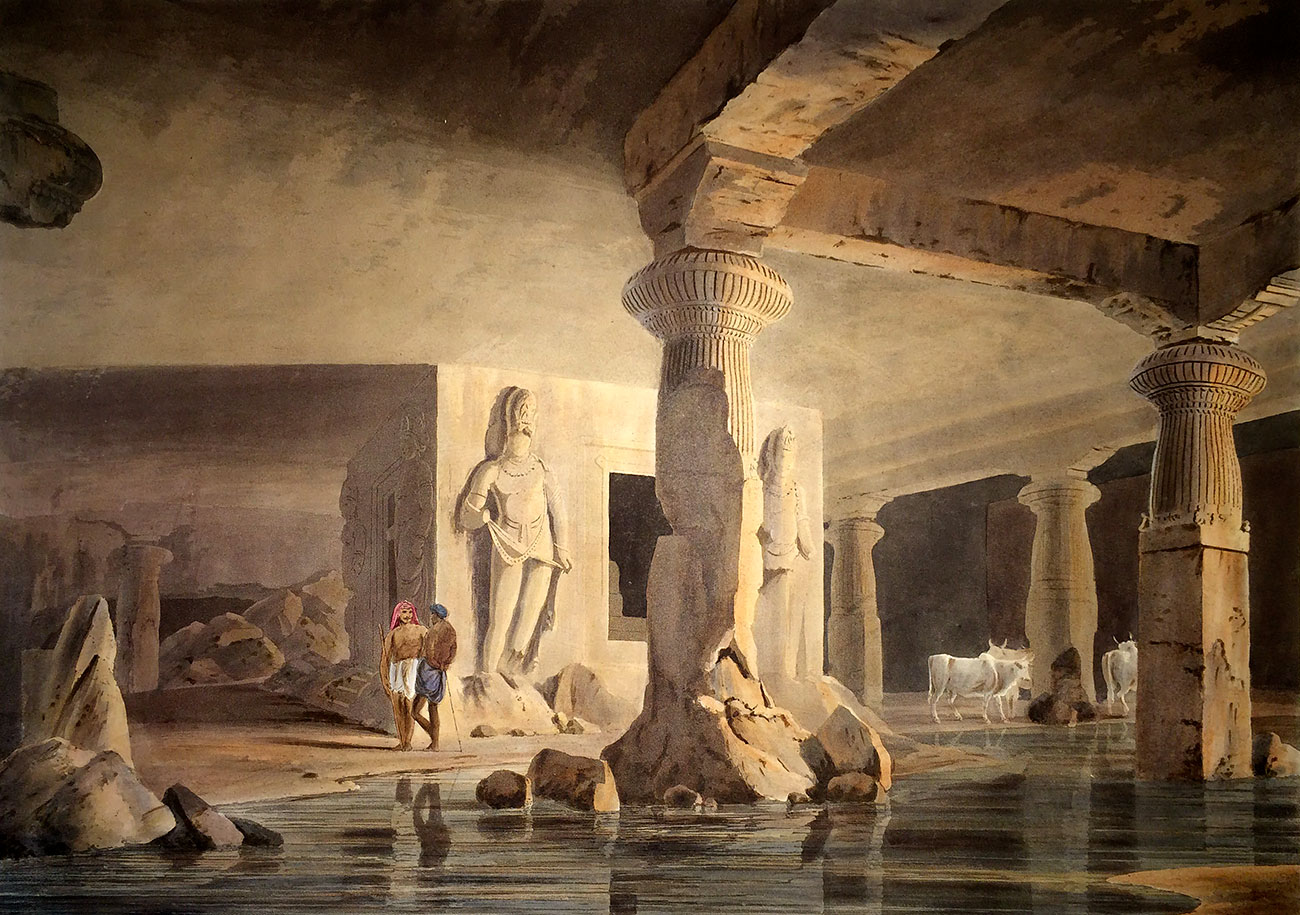 A shivalinga at the heart of this shrine is offered to the devotion of the faithful in this rock-cut temple, guarded by pairs of huge guardians placed along the entrances on the four sides. The flat ceiling is supported by fine partially carved columns, while the heap of destroyed rocks on the left of the image indicates a former natural access to the temple. 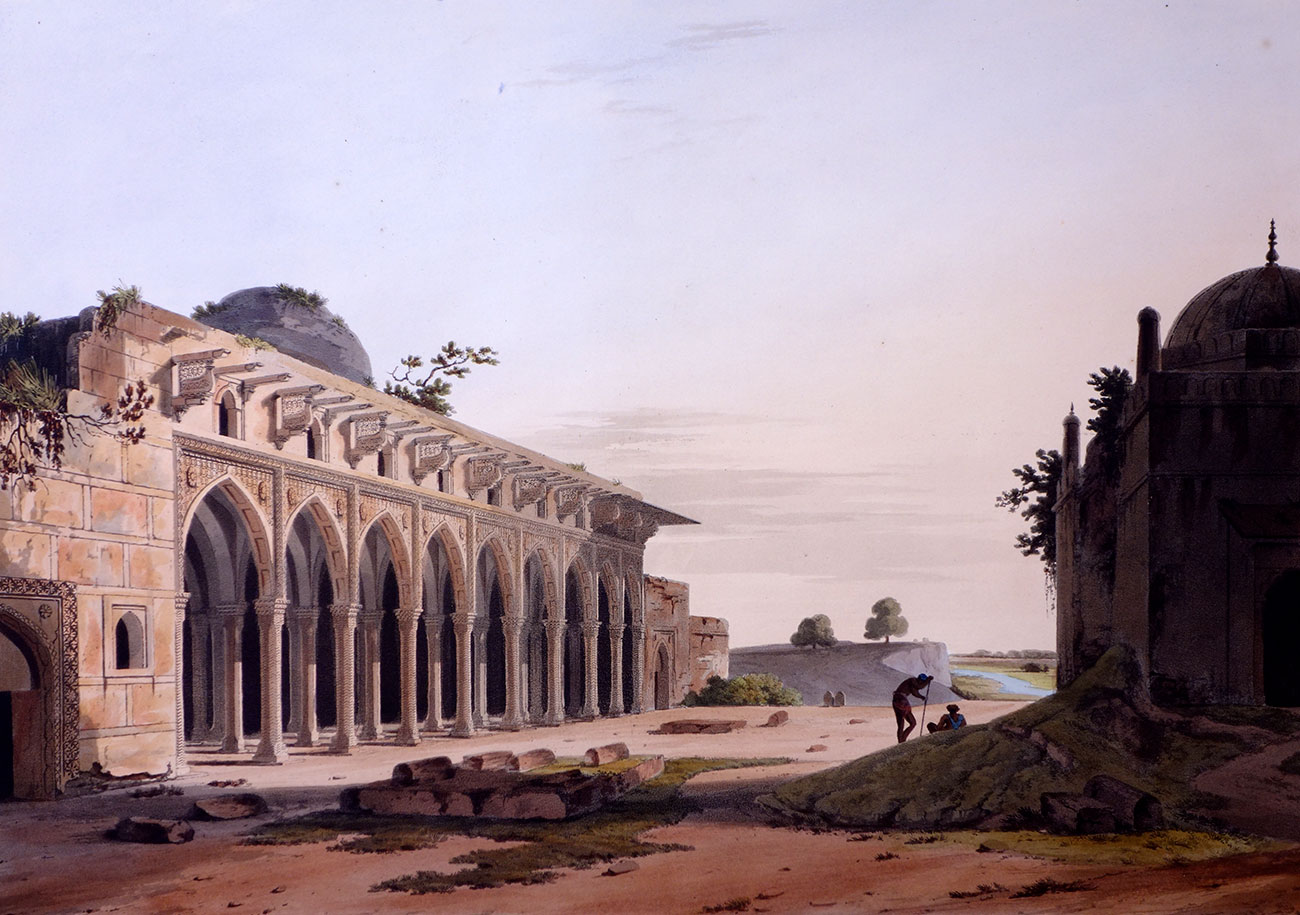 The remains of the Kanauj mosque date from the 7th-8th century but the other buildings erected by Iraham Shah of Jaunpur date from 1406. Today the site is called Makhdum Jhanina, and it features columns, arches and a prayer room typical of Muslim architecture before the Moghul invasion. 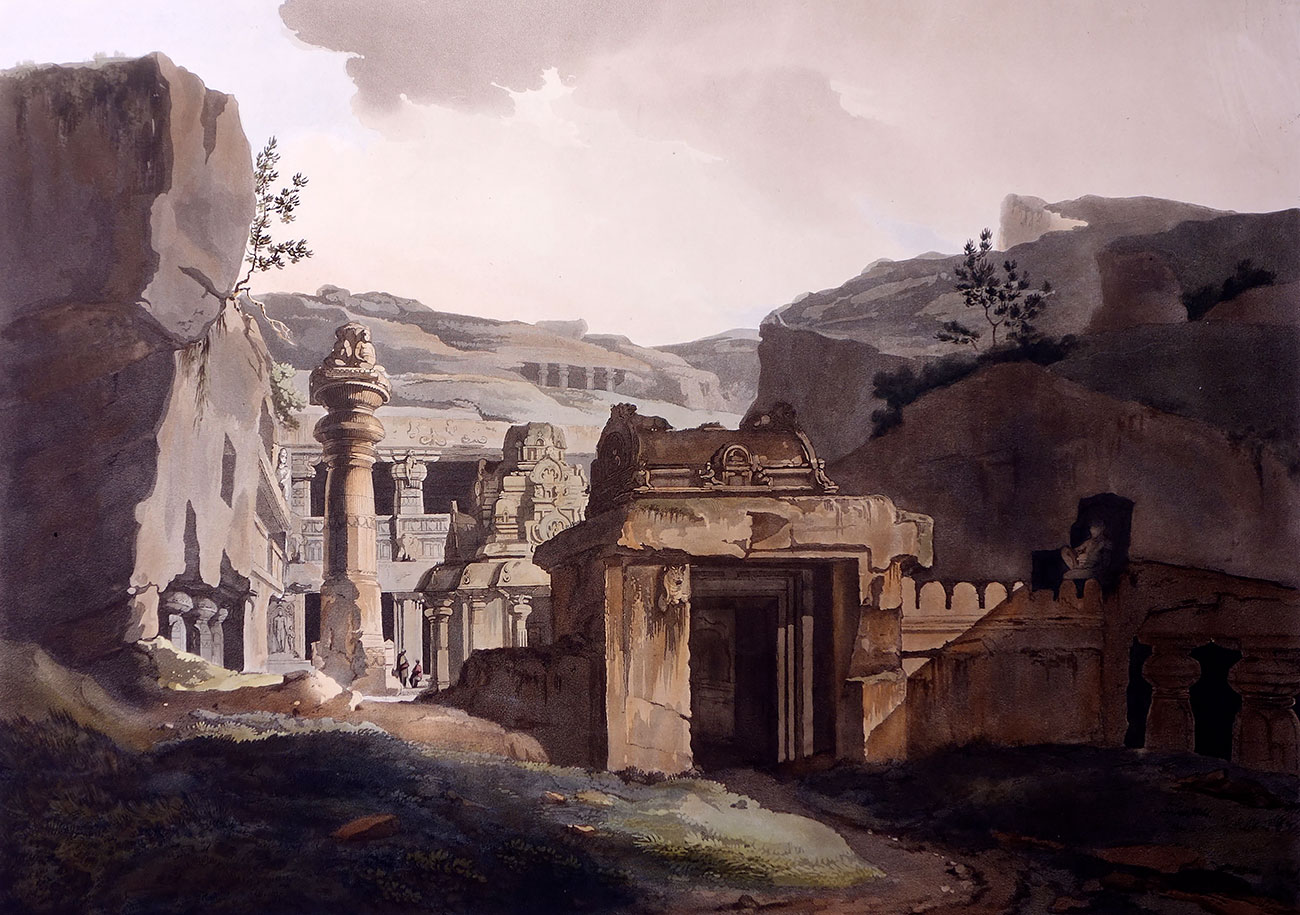 The largest of the Jain temples was carved during the last phase of construction at Ellora and goes back to the Rashtrakuta Period, 9th century. Nowadays the temple is accessed via the gate at the middle of the boundary wall, which did not exist in Daniells’ time—therefore the altar and the column could be seen without obstruction. 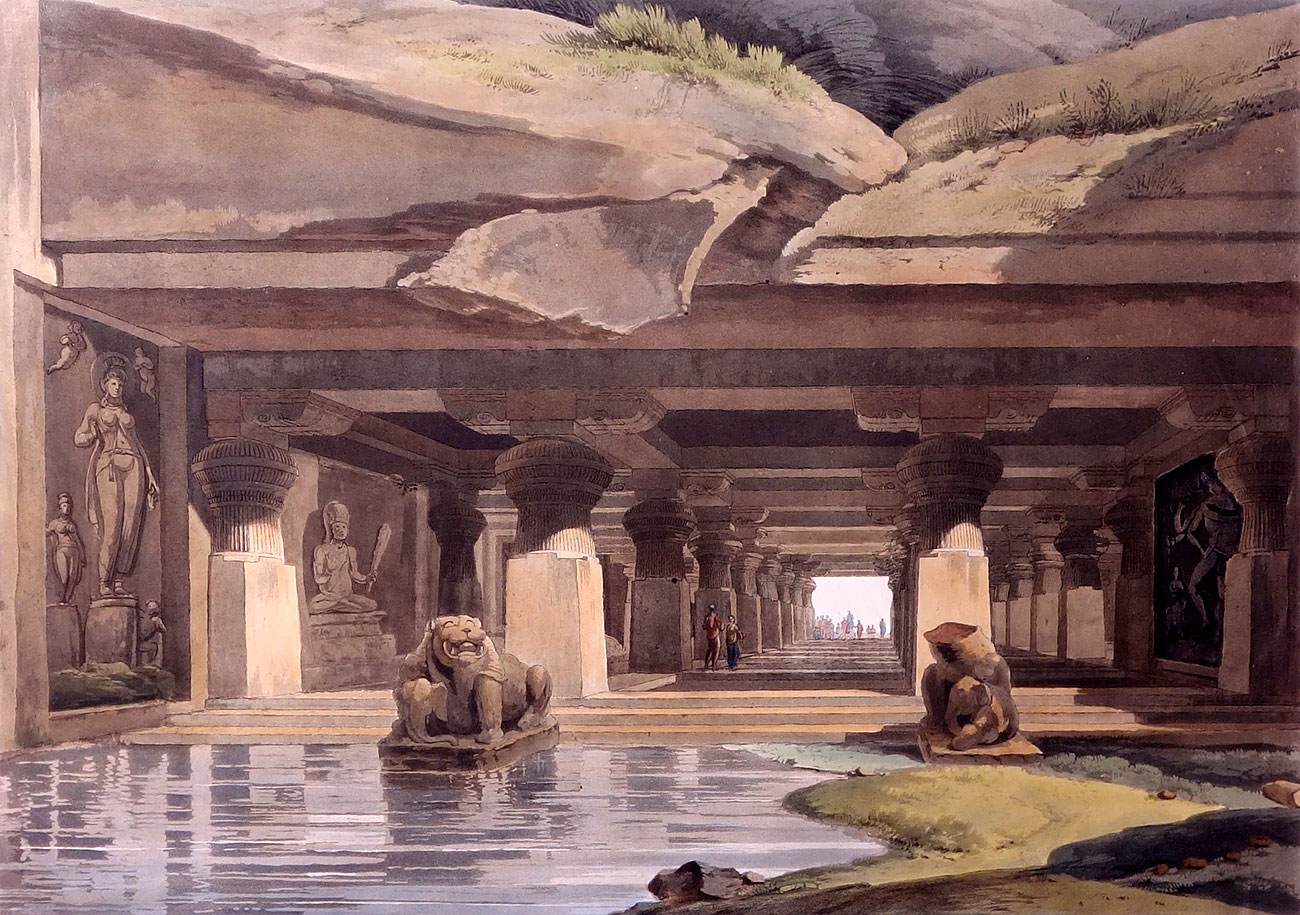 This wonderful cave-temple dates from the Kalachuri Period, 6th century. The south stairway guarded by lions had already been burned when the Daniells saw it, but the endless colonnade supporting the ceiling and framing the various gates while letting light in between them remained an impressive feature. The side walls were covered in large sculpted figures and, as can be seen in the image, a precious water source was also there for the pilgrims. 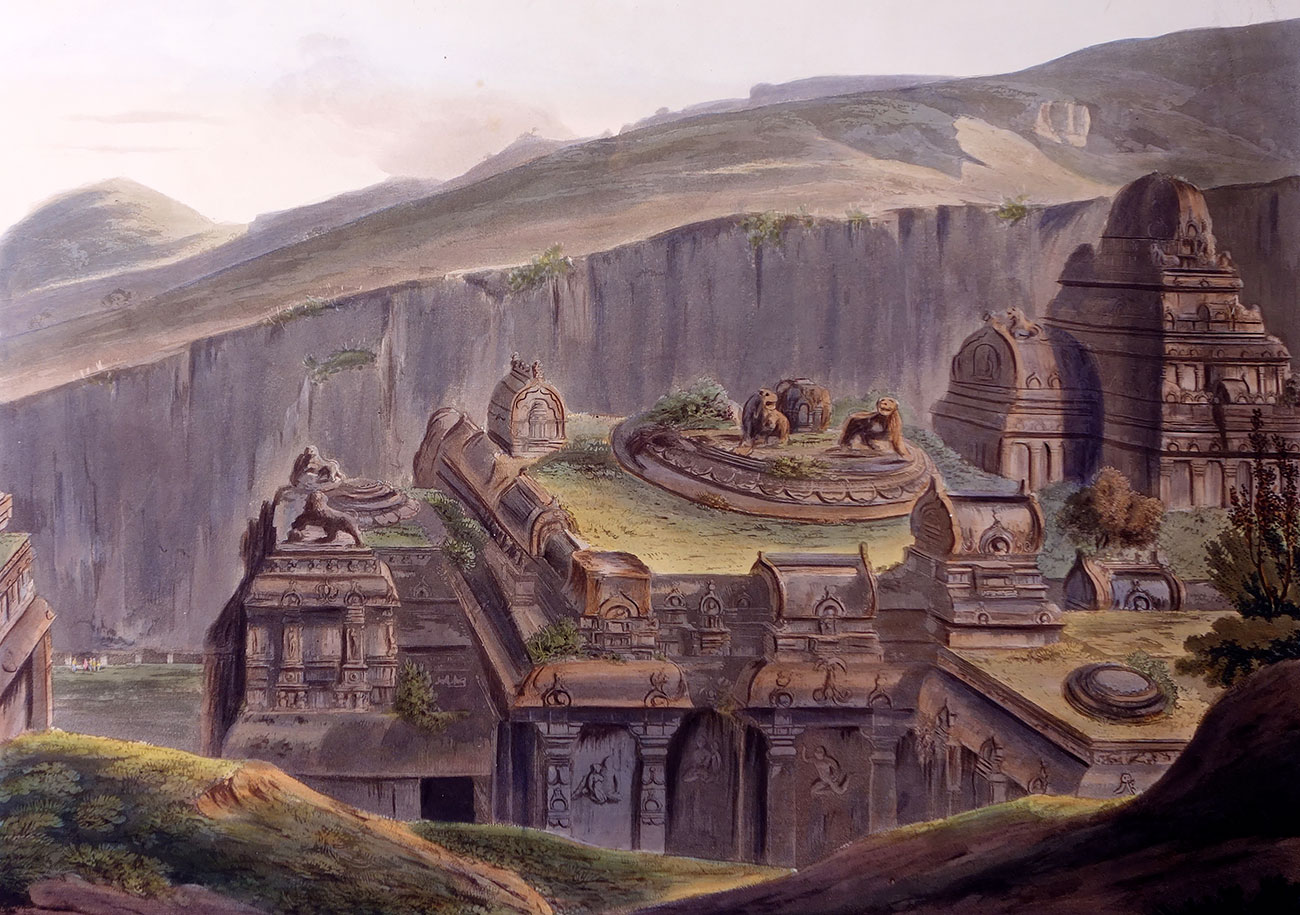 In the mid-8th century Krishna I, the most powerful of Rashtrakuta kings, began the excavation for what was to become the most imposing rock temple in the whole of west India. The king’s intention was that it should be seen as a lonely silhouette on the three hill sides. It was a complex monument made up of several buildings—the shrine, the colonnade, the pavilion of the sacred bull Nandi—andsurmounted by stunning roofs in different shapes, ornamented and protected by numerous figures of fierce lions.