28 Feb Paris: FENDRE L’AIR, The Art of Bamboo in Japan

Have you ever spent three hours visiting an exhibition and then felt the need to see it all over again? This is what happened to me when I saw “Fendre l’Air: Art du Bambou au Japon” (Cleaving the Air: The Art of Bamboo in Japan). Each step was a new discovery, each display a fresh emotion.

I first approached the art of Japanese bamboo in 2016 when I organized “Japanese Weaving,” the first exhibition on bamboo art in Italy, but the Paris exhibition revealed to me more secrets, more artists, more perspectives of this “stowaway” as Stéphane Martin, Director of the Musée Quai Branly-Jacques Chirac in Paris, calls the art of bamboo in his preface to the beautiful catalog.

“Stowaway” because for many centuries in Japan bamboo was considered too poor a craft – and also too popular – to aspire to become an art form, unlike the case for swords, lacquer, textiles, and ceramics.

Curiously enough – despite the fact that bamboo basketry is a thousand-year-old tradition – it was only in the second half of the 19th century and up to World War II, that works manufactured by bamboo artisans began to be considered an artistic expression. 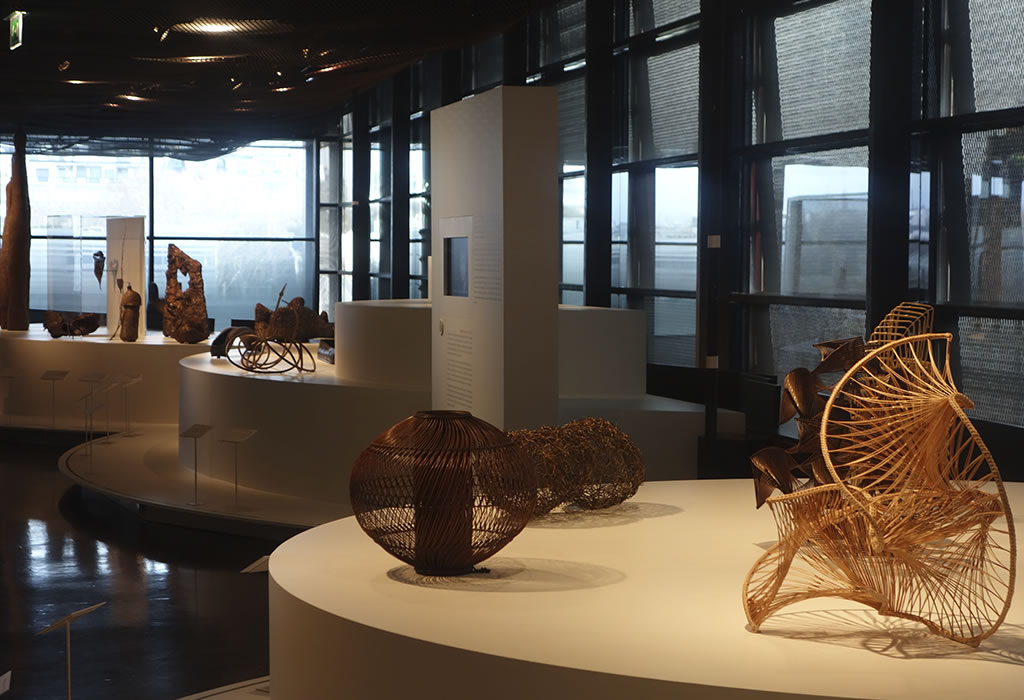 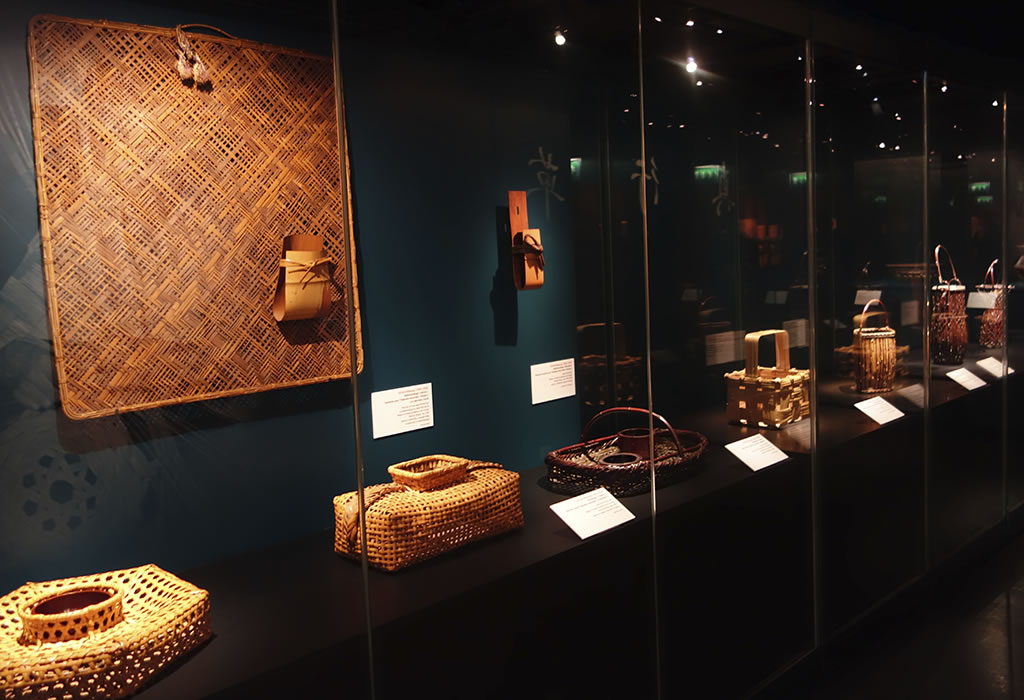 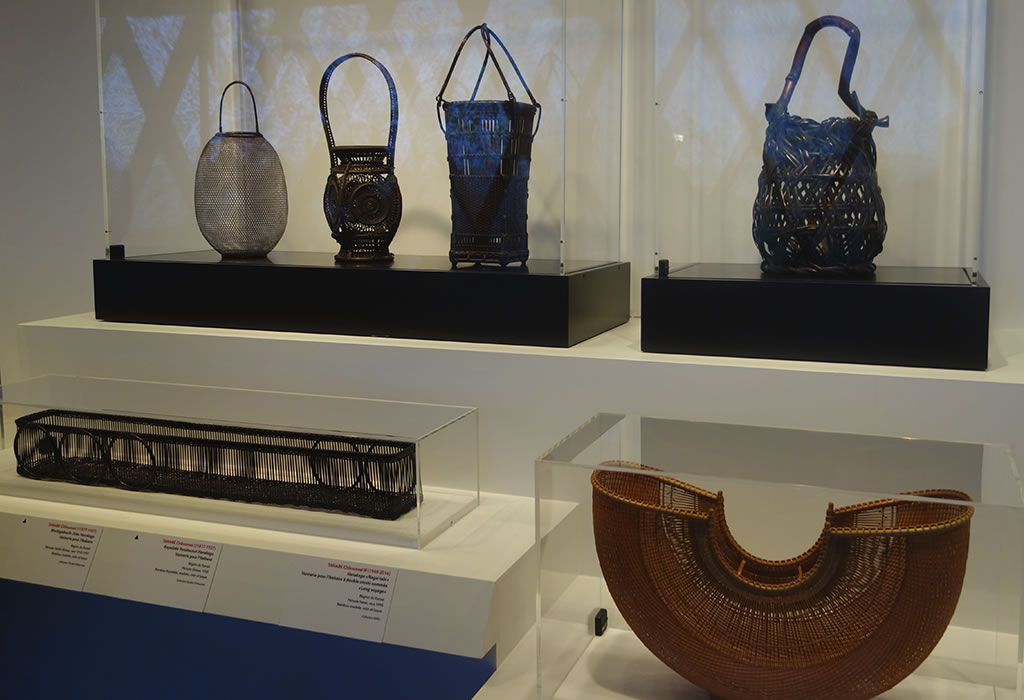 The exhibition is divided into two main sections: the first presents “the story” of the appreciation of bamboo and of the artisans who, from the mid-19th century onwards, were able to transform it from a simple material for the manufacture of quotidian objects (utensils, baskets, flower containers and a few others) into a true art. The second section presents seven celebrated contemporary artists who work with this material.

The history of bamboo in Japan is not just connected with the production of basketry and containers for daily or ritual use, but also with tea drinking which was introduced from China as early as the 10th century and soon gained wide acceptance by the aristocratic elites and then by the affluent classes. Considered a drink with healing properties for body and soul, tea drinking gradually acquired a rituality carried out in purpose-built rooms with special decorations and implements.

Two “schools of thought” were born: The first one is called “Matcha” from the Japanese name for powdered tea. Adepts of this school turned tea tasting into an initiatic experience with a spiritual significance transcending the taste of the drink. Each gesture is controlled, ritualized like a martial art which in lieu of weapons uses tea pots, cups and a few implements for the tea ceremony. In the purely Japanese “Matcha” school a connection with Zen Buddhism is quite evident. The second one is called “Sencha,” inspired by the Chinese tradition of steeping tea leaves in hot water, and gathers cultivated tasters to share the pleasure of the palate but also the company.

The focus of the first section of “Fendre l’Air” is the reconstruction of two rooms dedicated to these two manners of tea drinking. The rooms are very similar – only an adept can perceive the formalism and subtly more pronounced sobriety of the “Matcha” – both contain ikebana vases, baskets, small tea containers, trays, and a few more bamboo objects created by artisan-artists who gave their works a special shape for a special moment. 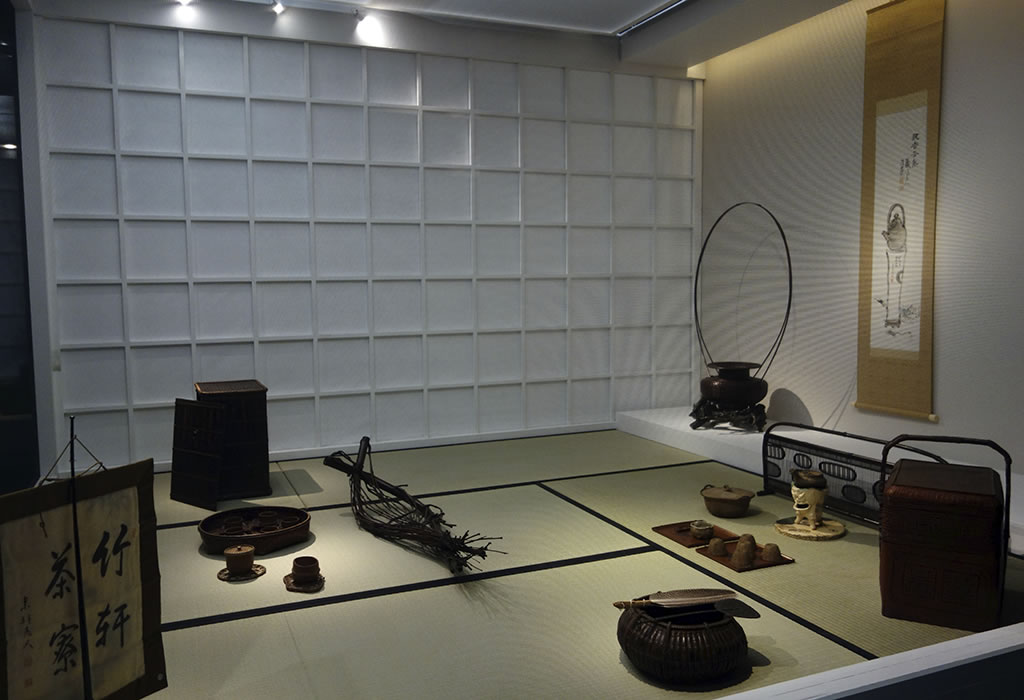 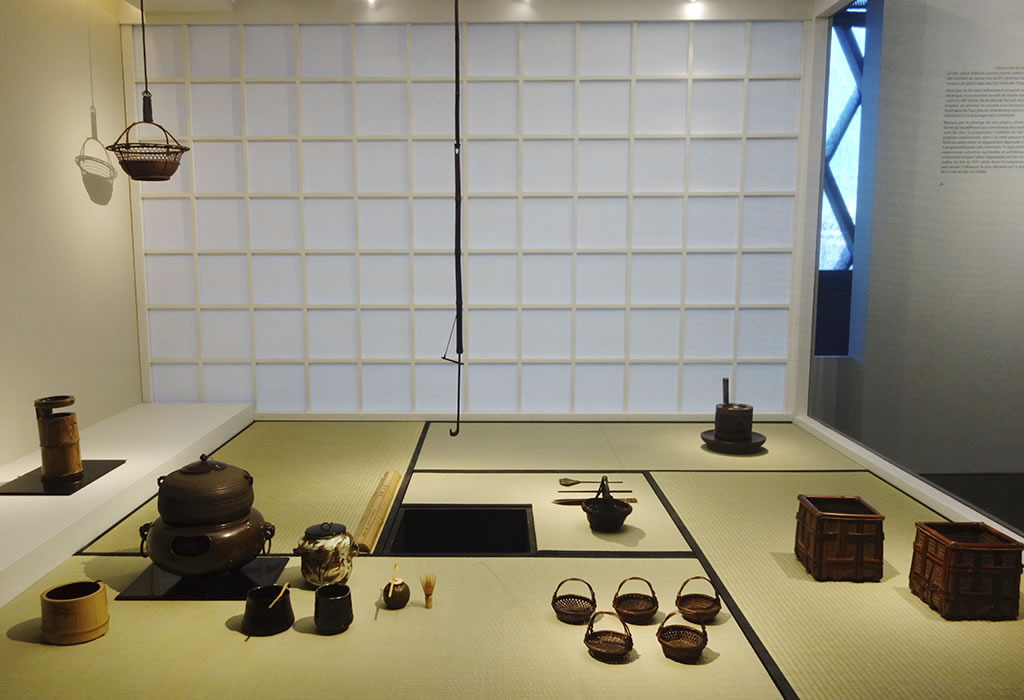 In this “historical” section the curators have selected those artists who – while observing the tradition – have experimented with innovative shapes and techniques compared to the standard production.

In this context the work that strikes me most is called “Morikago” by Suzuki Kyokushosai (1872-1938). It is a sort of tray made from some 20 rattan branches of various thicknesses, about 120 centimeters long and tied at their ends, widening at the center in an oval concave shape meant to contain sweets. The result is a bundle of branches that seem casually arranged, but the combination of thick and thin, smooth and knotty branches all overlapping creates a form of sublime balance and absolute modernity. 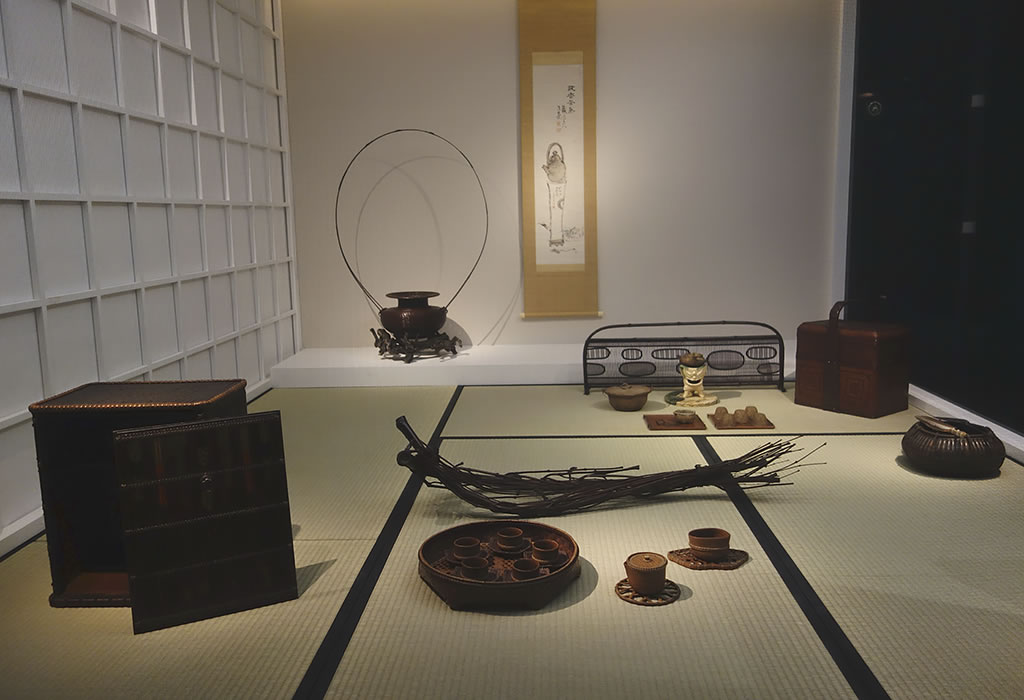 Iizuka Rokansai (1890-1958) is considered the greatest innovator who turned bamboo from a simple material to a work of art. A considerable number of his works is exhibited, notably ikebana containers which enchant with their technique and inventiveness. To imagine his “baskets” adorned with a flower or a green shoot is like listening to a poem or a pure sound caressing the mind. The work that impressed me most is a sort of handleless medium-size vase, the neck made of regular thickset rods widening at the bottom and joining a spherical body made of a wide chaotic weave of rattan stripes – an image of the seemingly insoluble contrast of order and chaos. But the strikingly inventive and bold solution is constituted by the flat bottom placed sideways, so that the “vase,” rather than being axially aligned like most usual vases, stands at 45° on one side, like one of those paradoxical Zen questions aimed at disturbing the traditional rational mind. 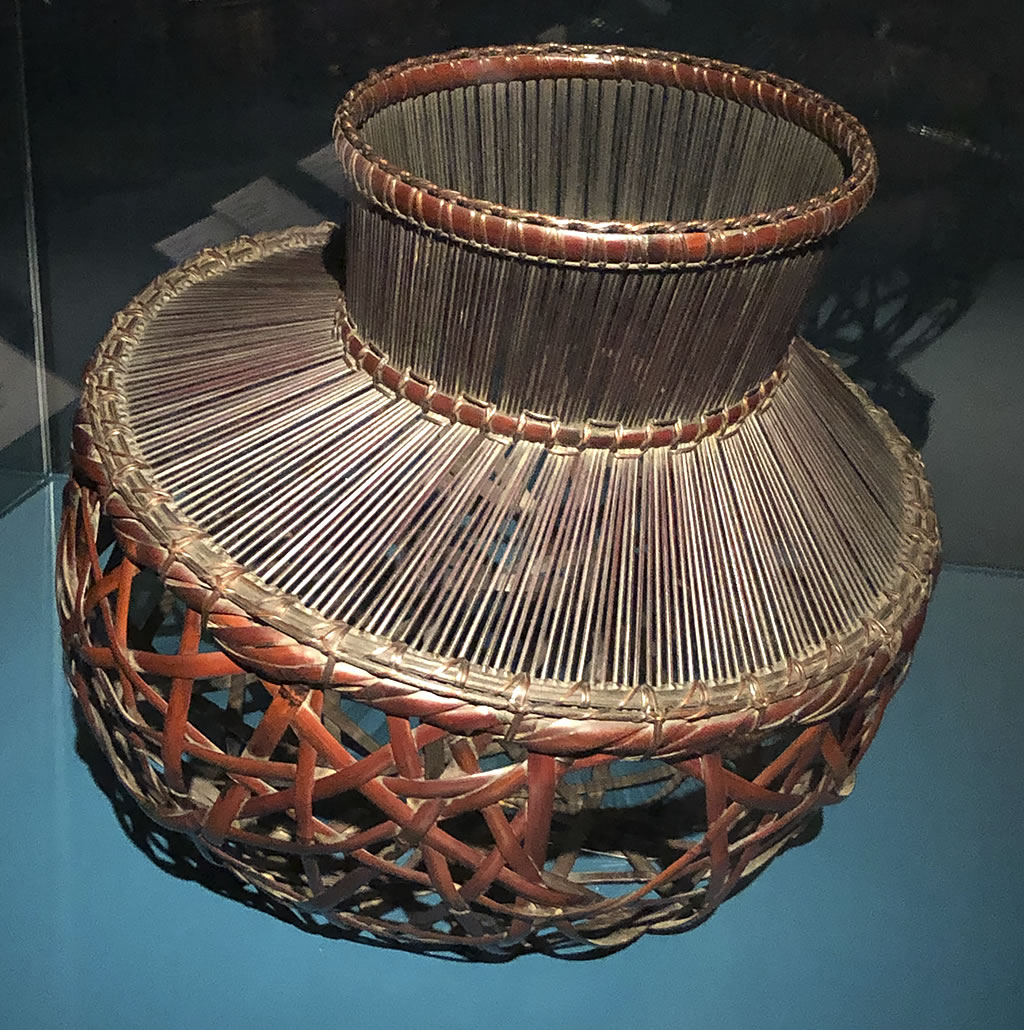 The second section presents works by seven of the best contemporary artists, many of them quite removed from tradition and producing works that can be considered true sculptures. The shapes are often abstract, obtained by very fine weaving, so light that the flapping wings of a butterfly might be enough to make them move, rotate, lift into the air, expand and then shrink back.

Nagakura Ken’ichi (1952-2018) uses dark lacquered bamboo with a compact weaving full of relief, so much so that the material acquires the solidity of a sculptured form obtained with a chisel. 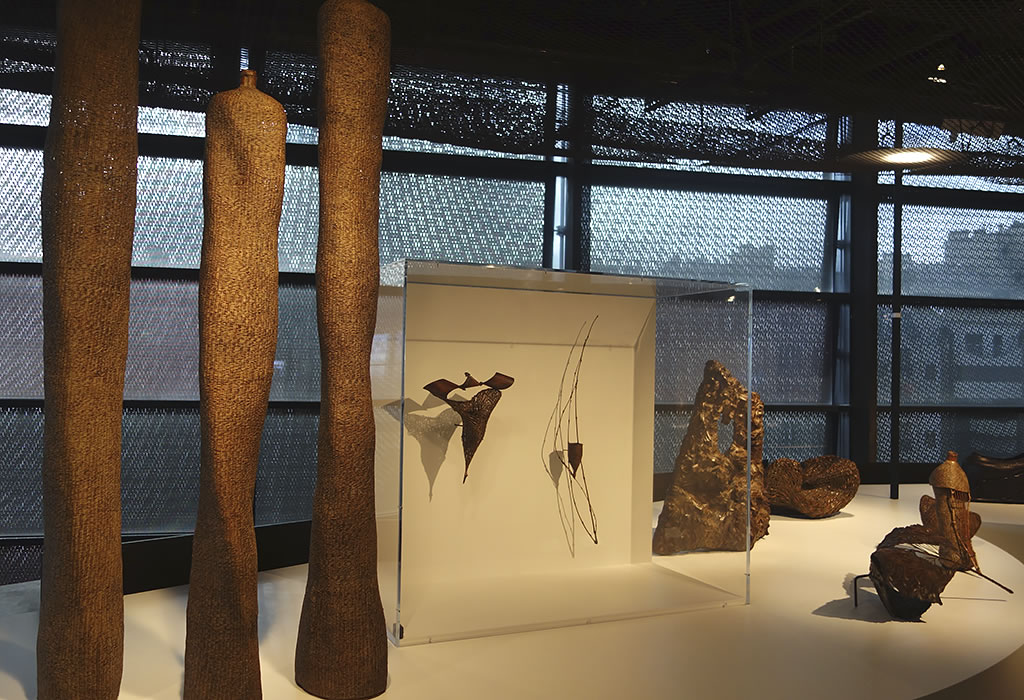 Morigami Jin (born 1955), Sugiura Noriyoshi (born 1964) and Honda Shoryu (born 1951) get to grips with the impalpable, creating veils of rush that seem to move like wings, tangle without losing their lightness, twist with the elegance of a sinuous dancer. 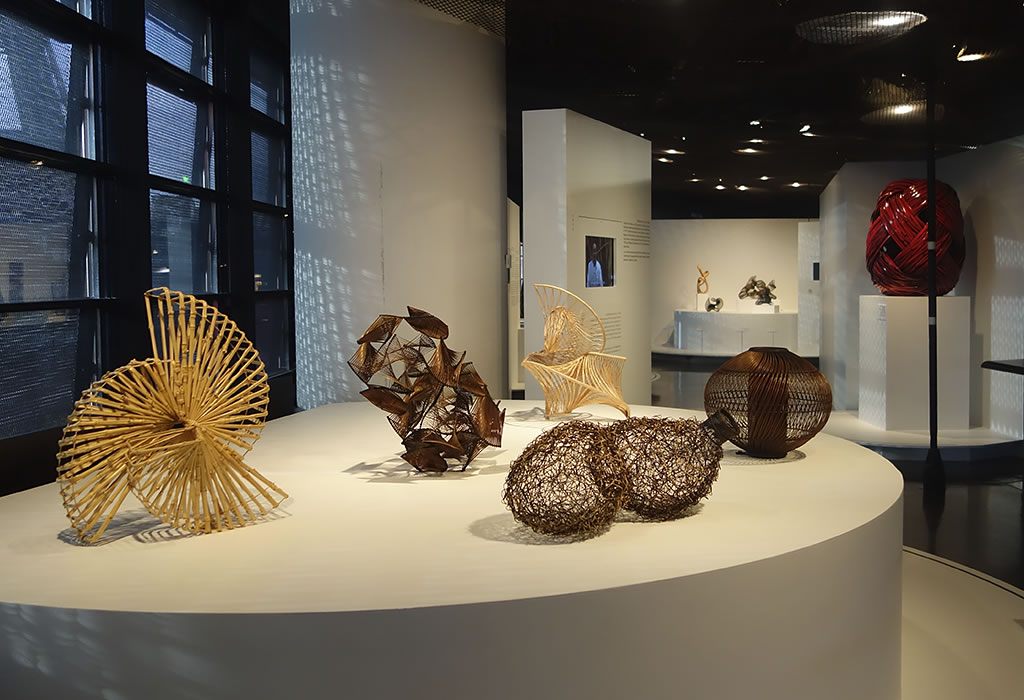 The last work I would like to mention is by Yonezawa Jiro (born 1956): a large oval shape, a one-meter-high hollow pod made of wide strips of red lacquered bamboo woven like an endless spiral. Jiro named it Daruma, the Indian master who brought Zen Buddhism to Japan, and indeed the resemblance to the stylized figure of the holy monk we see in some Zen paintings is striking. 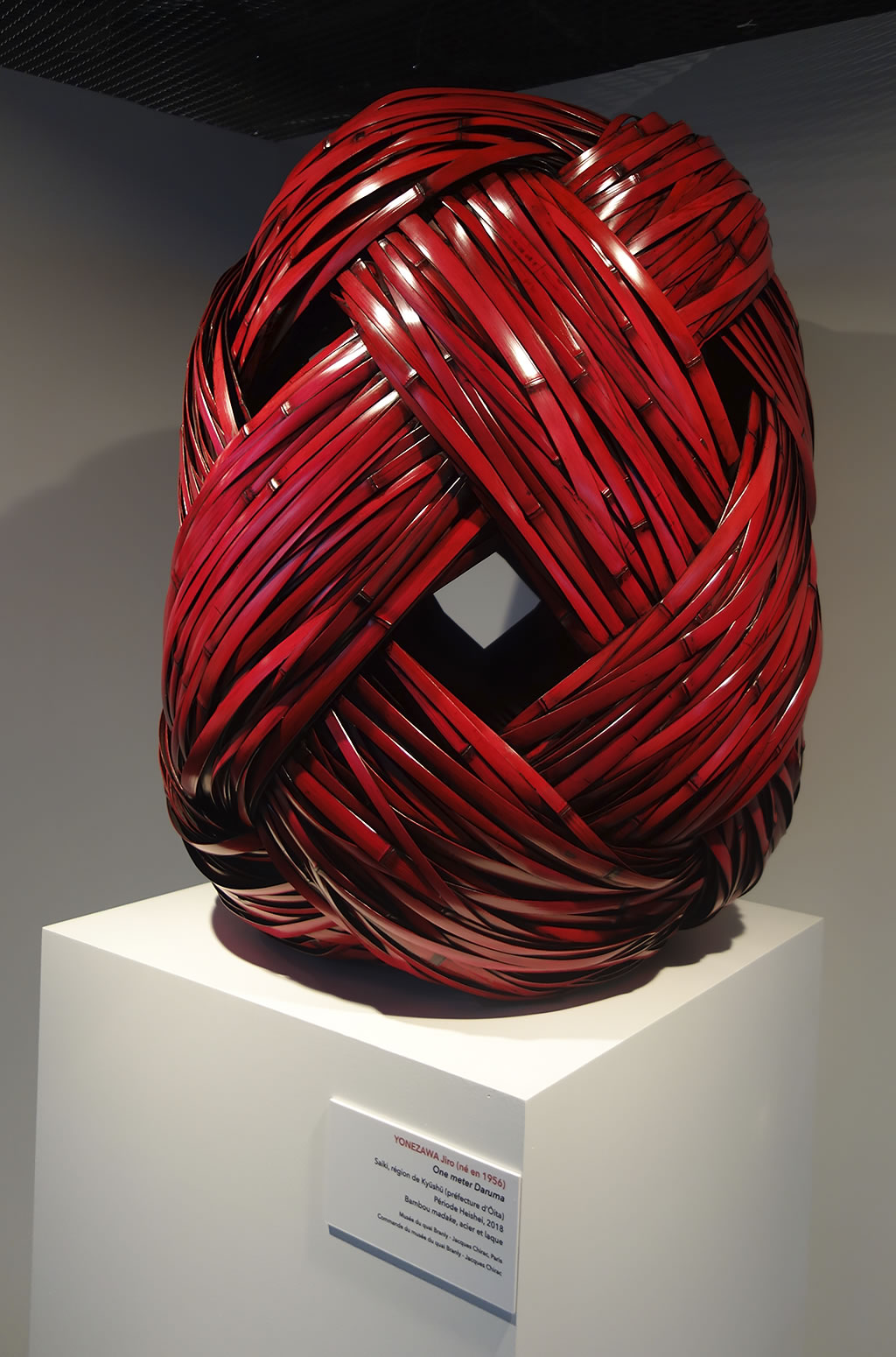 The works of these seven artists are accompanied by seven video interviews in which they tell their own stories, the inspiration that drives them to cut, bend, and weave the bamboo in order to give shape to what they feel in their hearts and minds. These portraits reveal a great and open humanity contradicting in this case the stereotype of a controlled and unapproachable Japanese character.

What I have described are just the aspects that struck me most in an exhibition so full of information, explanatory texts, and works that I had to go through it a second time.