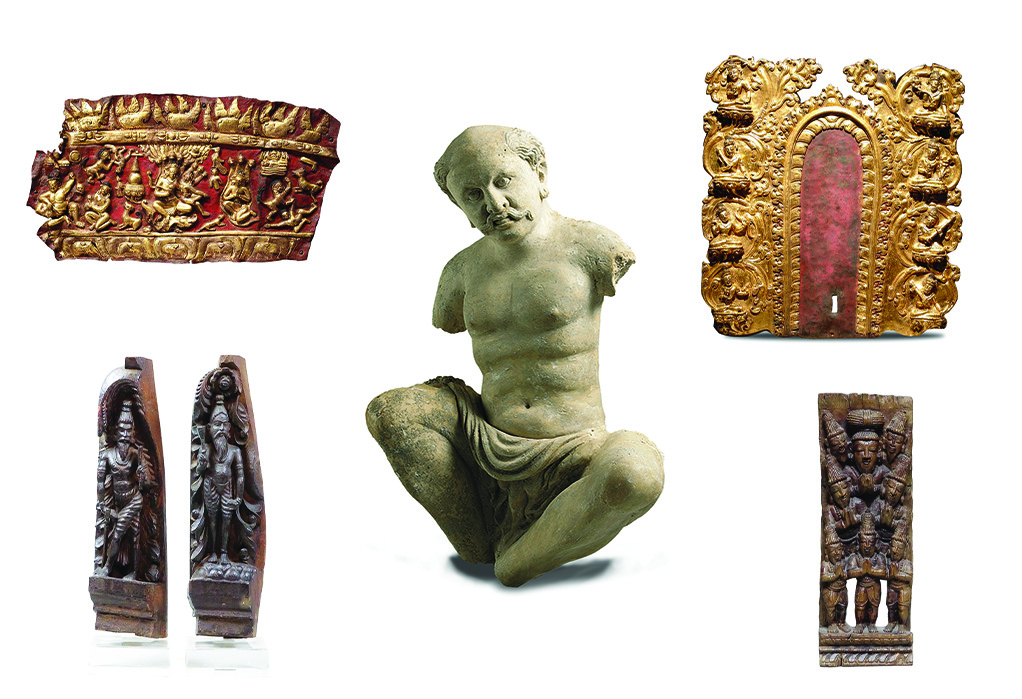 When Siddharta began his search for the extinction of suffering he initially chose that method already practised by Brahman and therefore Hindu ascetics which included various forms of mortification of the body. For this reason the reliefs decorating many Gandharan stupas also feature the figures of these ascetics who even to this day go on the same quest and have the same look: often bare-chested, with long beards and long hair gathered in a big chignon. In these two panels from a South-Indian procession chariot the ascetics (sadhu) are virtually identical to their Gandharan ancestors and confirm this millenarian tradition. The panel on the left shows a young ascetic wielding a forked stick in his right hand, used for keeping the body upright for long periods of time; the fork was used to temporarily support a leg or some other part of the body. The panel on the right shows an older sadhu, weighed down by age, holding a fly whisk. The last panel shows a group of seven ascetics plus an eighth one at center, but with a different hair style; they might be sadhus or more probably the Seven Rishis (Seers) handing down the wisdom of the Vedas to future generations. 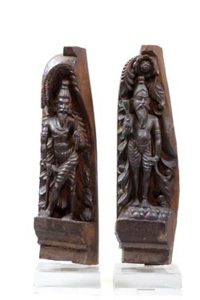 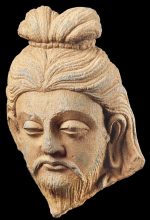 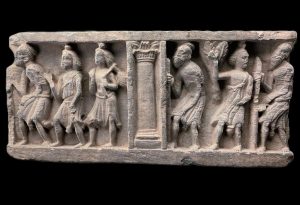 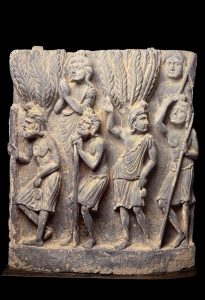 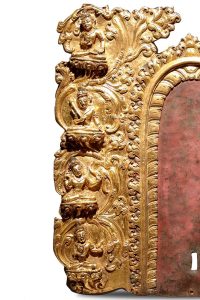 At this prabha’s centre was the statue of a standing figure. At its sides, eight different bodhisattvas sit on a lotus flower, worked in high relief. The style of this prabha is very similar to those of the famous Densatil Monastery that was destroyed during the Chinese Cultural Revolution.

In the Indian Hindu and Buddhist tantric tradition, cemeteries have played an essential role in the lives of ascetics: better than other places, they illustrate the corruptibility of the body and allow the practitioner to experience the inevitable decay of beings and things, hence impermanence and the inanity of passions.

At the left, Virupa, portrayed in the well-known episode in which he stopped the sun for two days in order to be able to continue to eat rice and drink wine; the tavern girl is shown kneeling next to him. The king and queen of the serpent deities are shown at the centre of the fragment, sitting in a royal posture under a canopy made of cobra heads; another snake deity under a similar canopy kneels at their side. Real as well as mythical animals are seen roaming and scavenging in the cemetery and eating corpses. A cremation is represented in the right section, whereas a stupa containing the relics of a religious master appears in the left one. 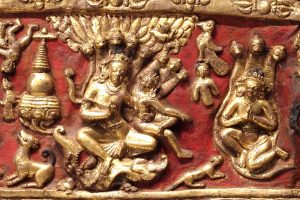 Two lotus flowers and Palden Lhamo – the only female protector of buddhism and Tibet – riding a mule are hold in a vegetable wattle above. This repoussé was part of a great decoration that covered the walls of a Tibetan temple. 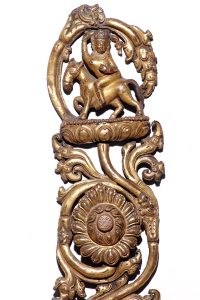 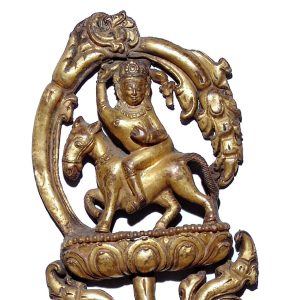 There is nothing macabre in the omnipresence of skulls and skeletons in Tibetan art, because their representation – not at all linked to ineluctability of death – turns them into protectors from the evil forces of ignorance, and their dance is the symbol of death and rebirth in the neverending circle of reincarnations. So that the skeleton – which in Italian popular culture is often associated to propitiatory gestures – in the Tibetan one it wears the mask of a popular theater’s figure, a funny quick dancer, often smiling, who amuses also the children. 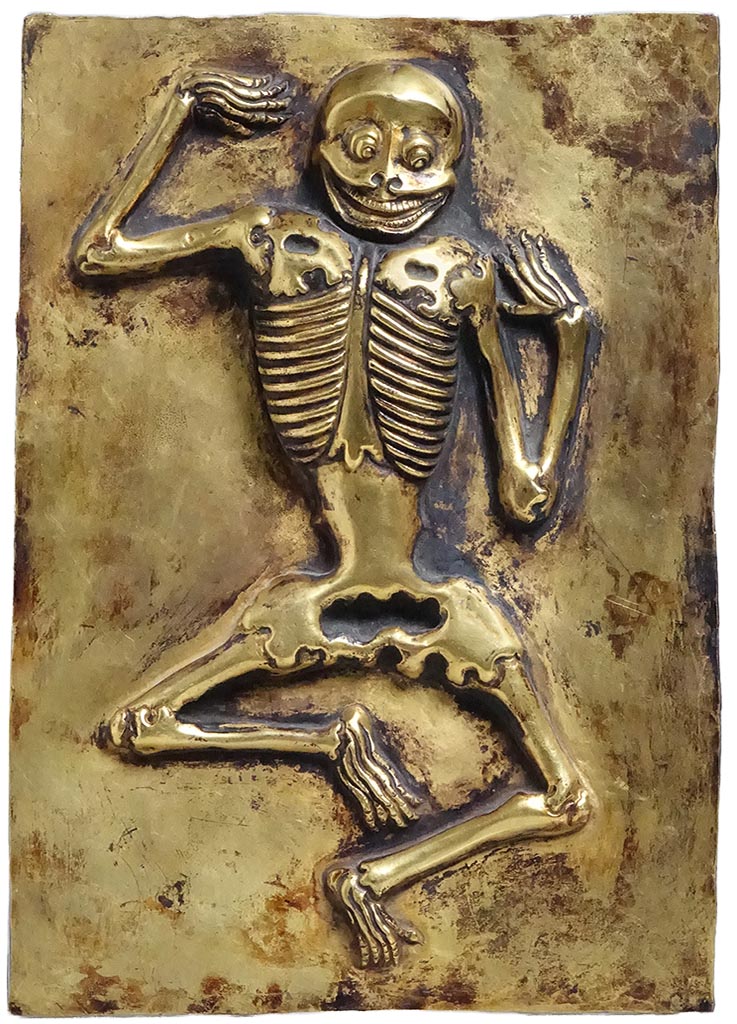 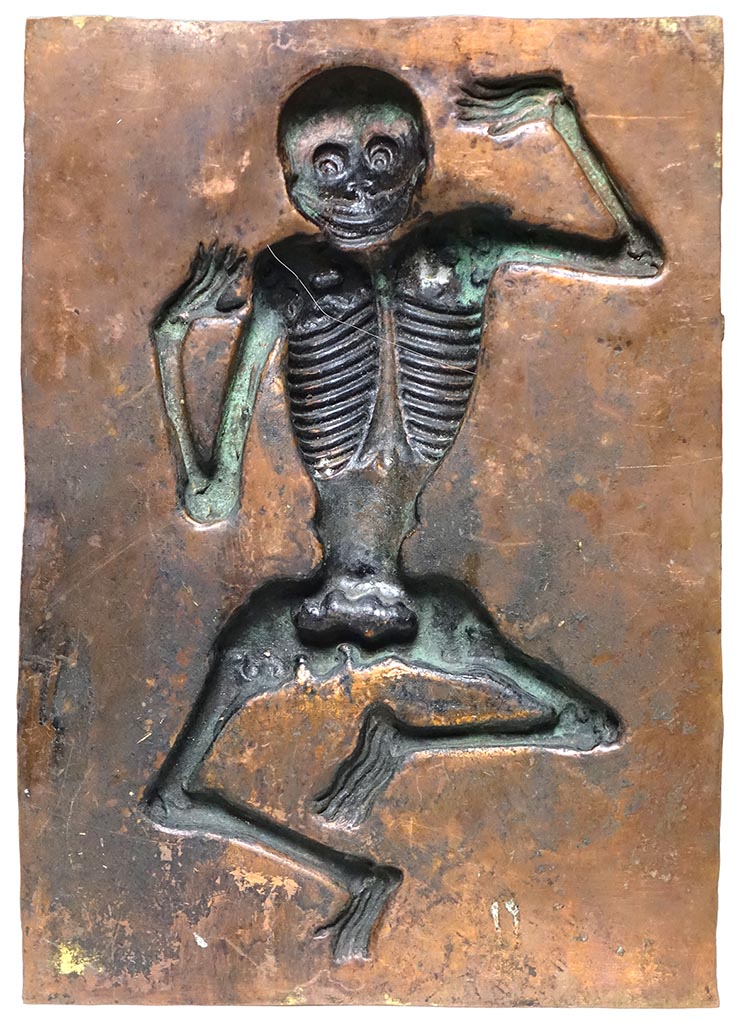 The beautiful twist of the neck seems to suggest a movement of the face towards an interlocutor. The three folds on the chest evoke a barely hinted forward lean. The soft and elaborate draping falls between the legs, and the knees and shins, are bent in a stance that does not express true rest. 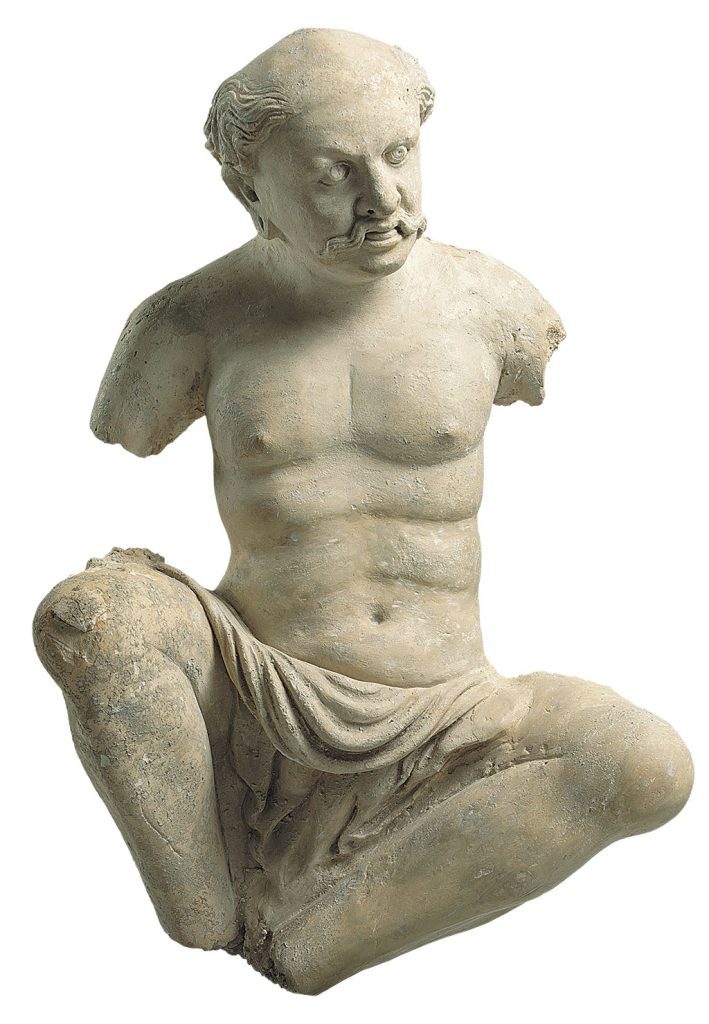 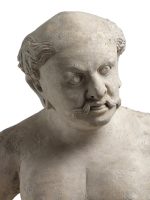 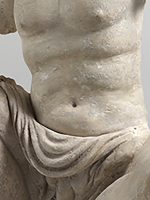 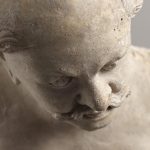 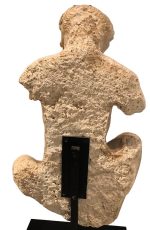 Even though he sits in a seemingly calm and composed posture, all the details of this figure seem infused with movement and action. It seems clair that this piece was part of a composition, probably comprising many figures: an event or a miracle of Buddha or Vajrapani. All the lineaments concur to create an expression on his face which mixes amazement with self-assurance and authority. The thick and knit eyebrows cast a deep shadow on his gaze, and the treatment of the eyelids is consistent with the scowl. The full cheeks, crossed by the orderly lines of the moustache, form marked folds around the strong nose. The mouth opens to show the tip of the tongue: possibly to indicate that the man is speaking?

Published on the catalog Myths and Rituals on the cover and at pages 6-9.