What do I remember from my trip to Yunnan 40 years ago? Red earth from the hillsides spilling onto the road. That enduring color had cut a visceral memory and I looked for it on this recent trip. Again, the red was ubiquitous. The soil supported the mountains of pines, oaks, wild rhododendrons; also the tended fields of potato, buckwheat, tobacco, blueberries. It was tilled in the landscaping projects in villages where denizens planted flower beds to beautify their communities, readying for tourism.

Yunnan province in southwest China is bordered by the Tibetan highlands in the northwest and tropical rainforests that extend into Myanmar and Laos in the southeast. The province is home to one-third of China’s national minorities, many of whom hold fast to their ethnicity and cultural identities.

My recent journey began in the provincial capital of Kunming, a metropolis of five million people. The highlight was visiting the Stone Forest where tightly packed limestone pillars, some 30 meters in height, resembled a petrified forest. Before the onslaught of tourism the area was home to the Sami minority who mostly made a living tending their plum orchards. Many now work as guides, grounds keepers, and souvenir hawkers at the site.

The bullet train transported me to Dali, a city 328 kilometers northwest of Kunming and capital of the Bai minority. After leaving the bustling new town I descended into a peaceful valley where the architecture changed into traditional Chinese-style structures with tiled roofs and skyward pointing eaves. The mud-and-wattle buildings were white-washed with gables decorated with large hand-painted blue motifs of curly clouds and stylized lotus flowers. 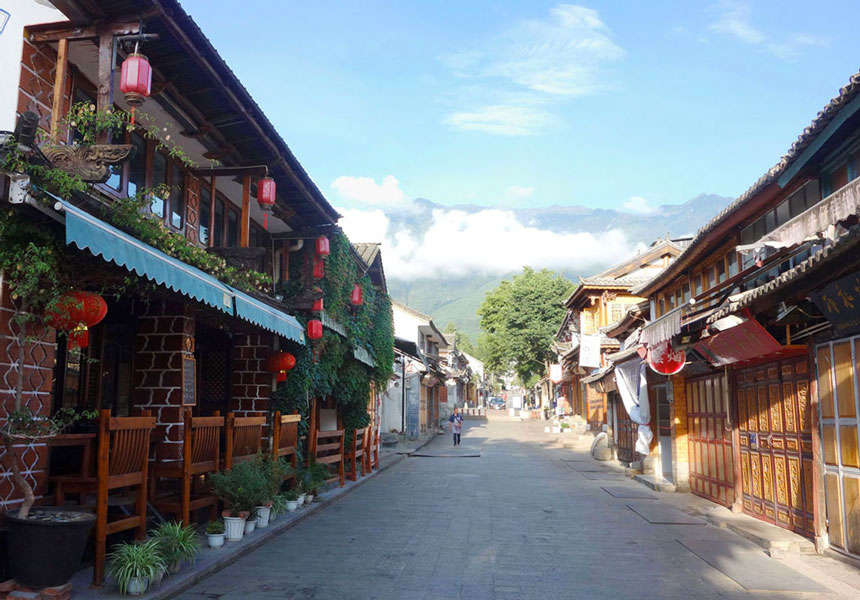 In the old town small shops and eateries lined both sides of the main thoroughfare. A jumble of religious buildings can be found in the narrow streets; they ranged from Buddhist and Taoist temples to an Islamic mosque, as well as a Catholic church crammed into a Chinese temple. 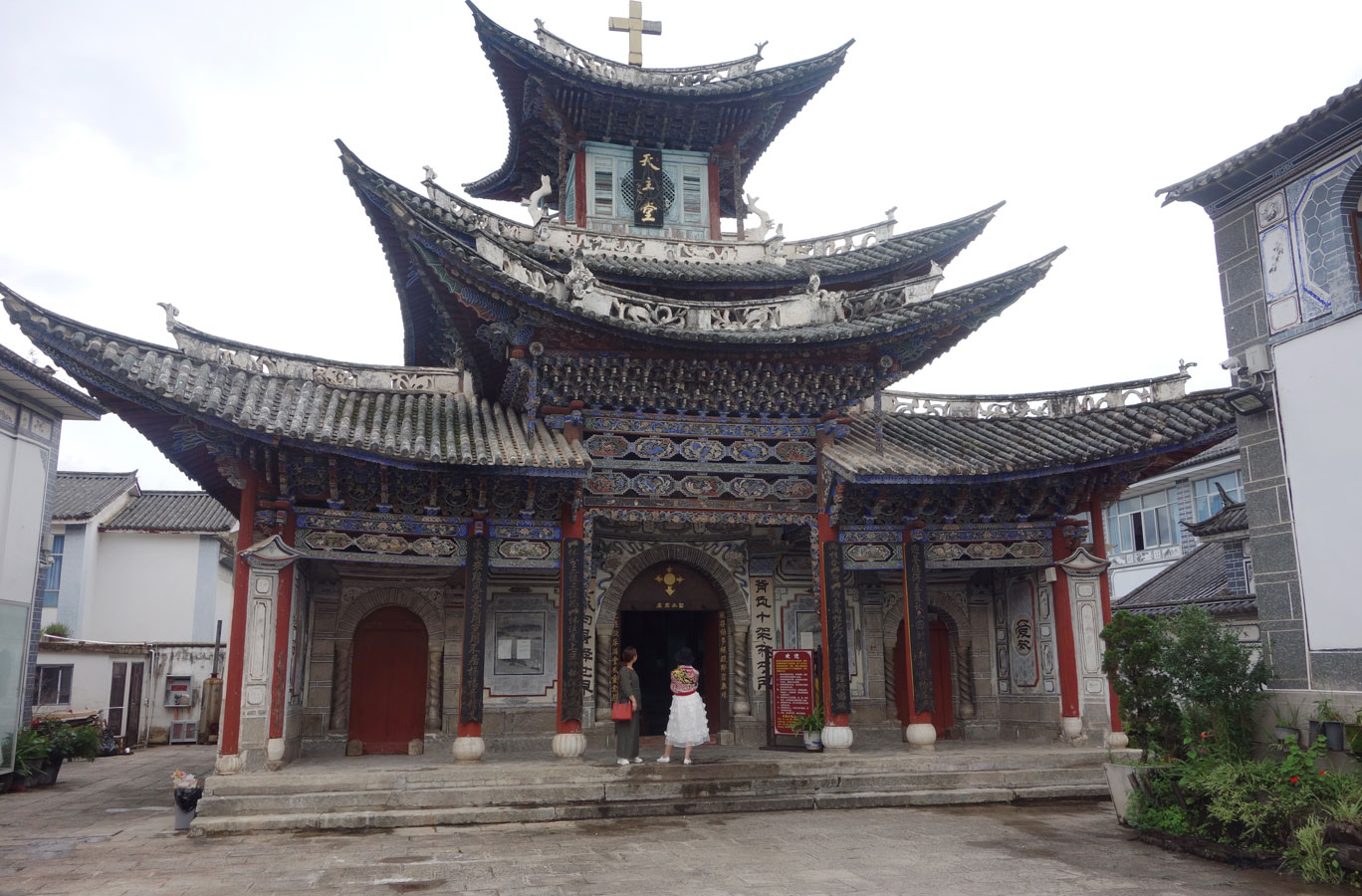 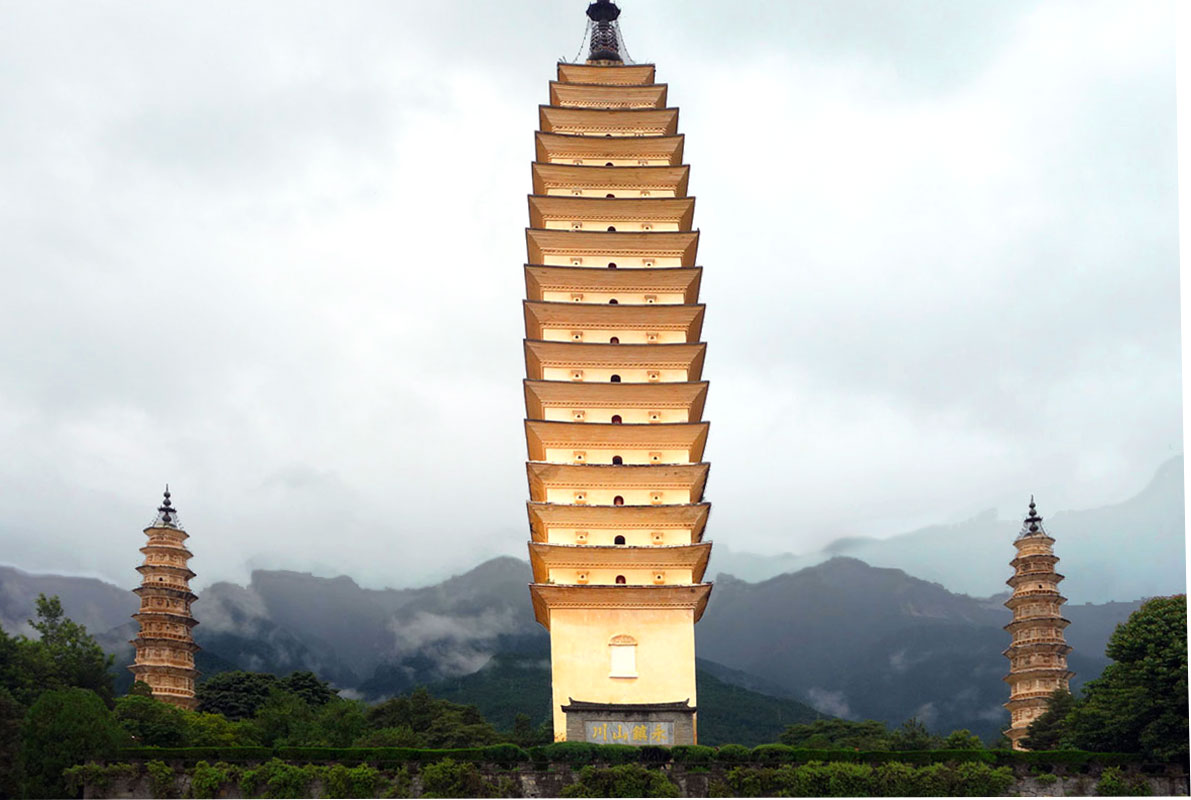 An evening stroll sharpened my olfactory glands to the scent of roses in the midst of merchants fashioning silver jewelry and fancy tea thermoses, and others displaying batik and tie-dye apparel in blue-and-white. The floral fragrance permeated the area causing me to lose interest in the rose-flavored sweets.

While in Dali I witnessed the Torch Festival, an ancient folk custom celebrated by many ethnic groups in the region. The worship of fire was believed to chase away evil and to protect crop growth.  Large torches made of dried pine wood attached with auspicious words on banners are erected at a central location in many villages. During the day festivities include traditional singing and dancing, horseracing, and eating and drinking. As night falls, the large torches are lit and the locals throw pine resin at them causing minor explosions. People carry smaller torches and parade through streets and fields adding to the festivities. 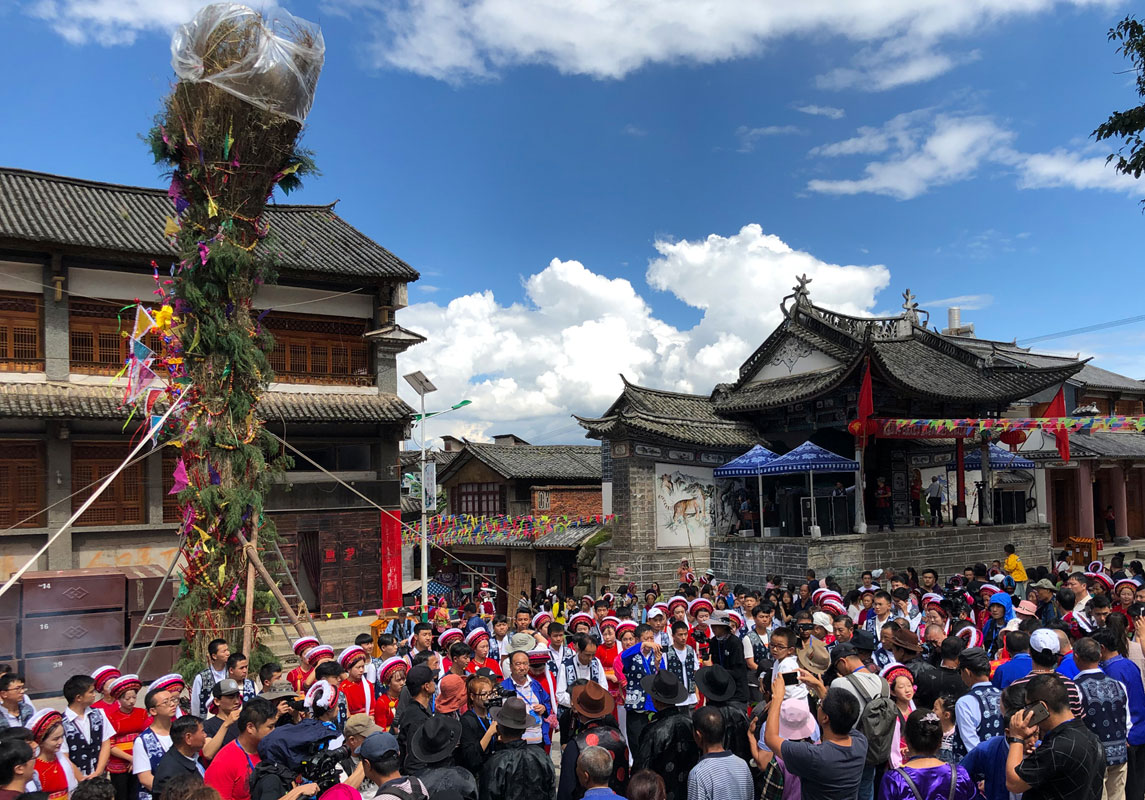 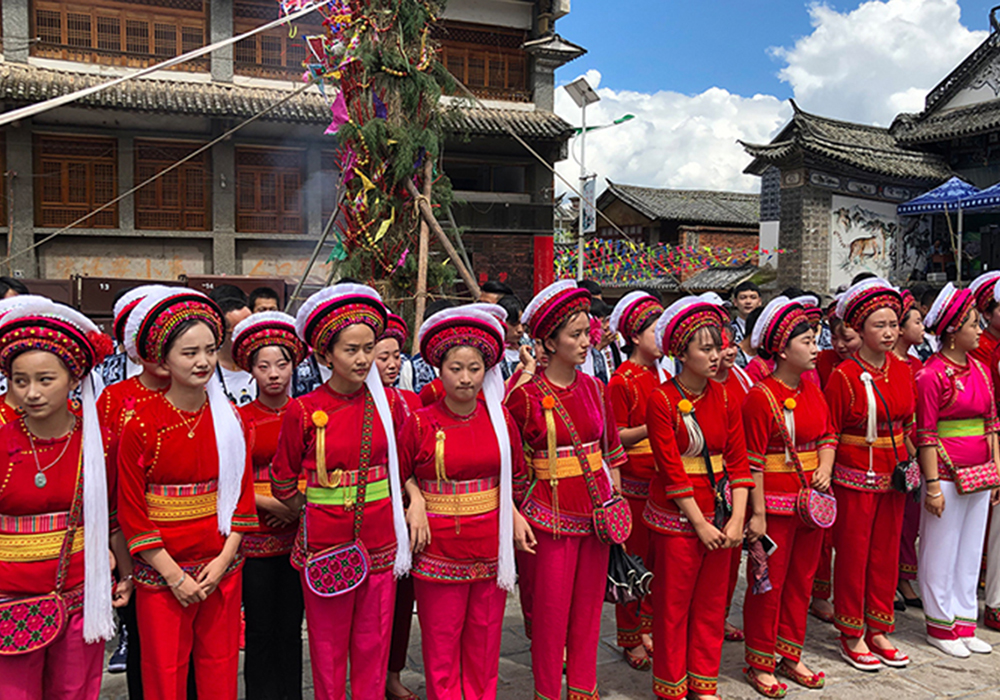 Lijang is my next stay. Along the way I stop a taxi at Shaxi, a lovely village during the Tea Horse Road, where the tea caravans went for century from the Southern Yunnan to Tibet and the inner China. 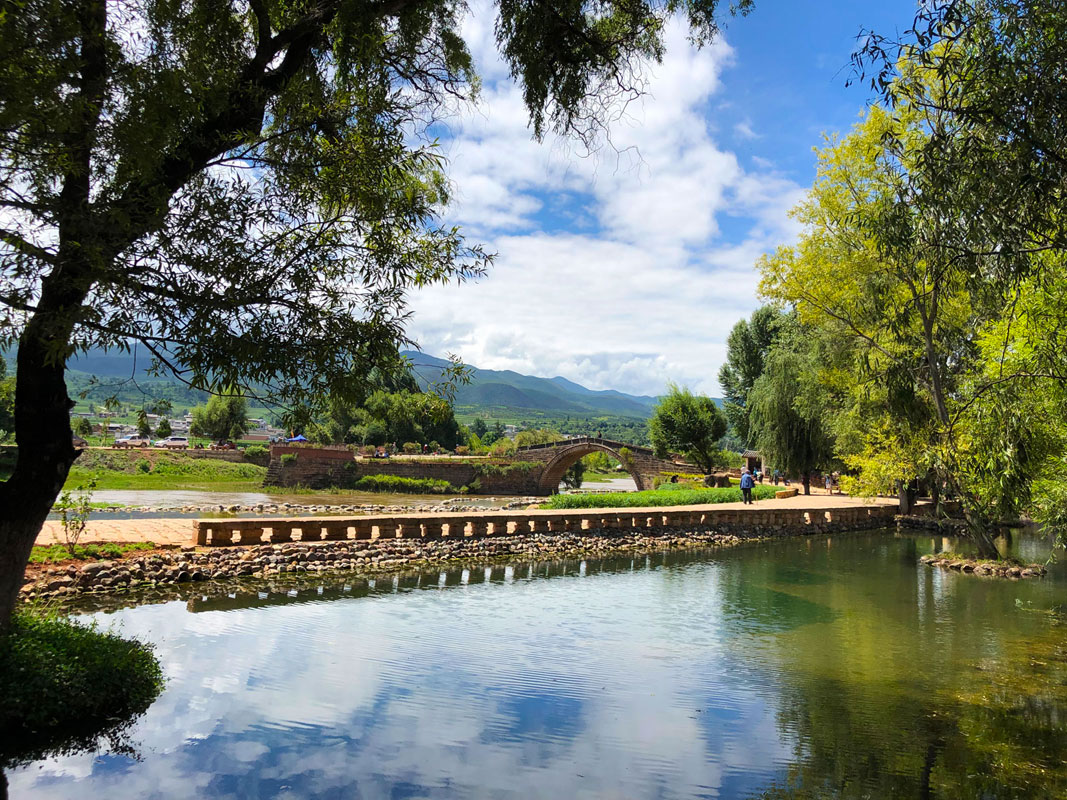 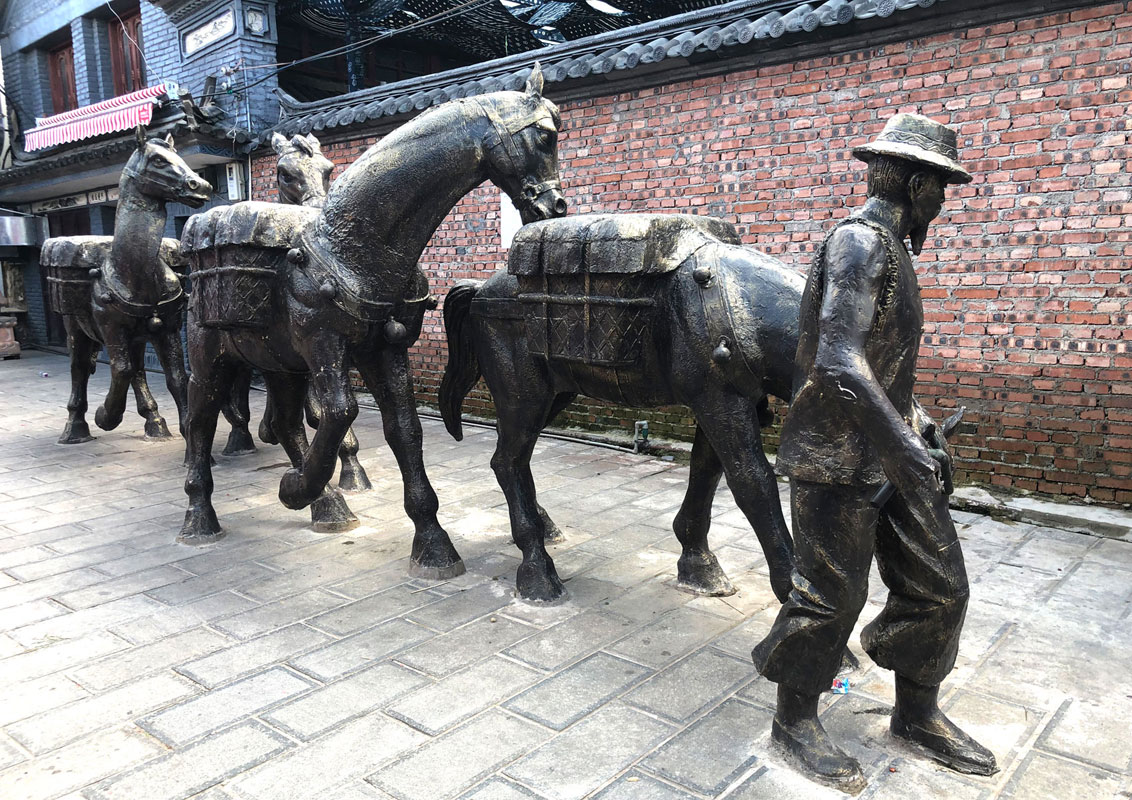 I traveled farther north to reach Lijiang, the premier tourist attraction in Yunnan. After the great earthquake of 1996 the old town was rebuilt and prettied up with gardens and paved lanes. The wooden doors, screens and shutters of the buildings were re-embellished with carved images of flowers, vines, and birds. Many family homes have been converted into guesthouses while others were sold or rented to outsiders who turned them into cafés and souvenir shops.

My local guide accompanied me to Wangu Lou Pavilion, a 33-meter high structure standing on Lion Hill, the old town’s highest point. At the top I was rewarded with a view of homes with their characteristic grey tiled roofs and flying eaves. While we circled the landing, my guide commented on Lijiang, the capital of the Naxi minority to which he belonged. 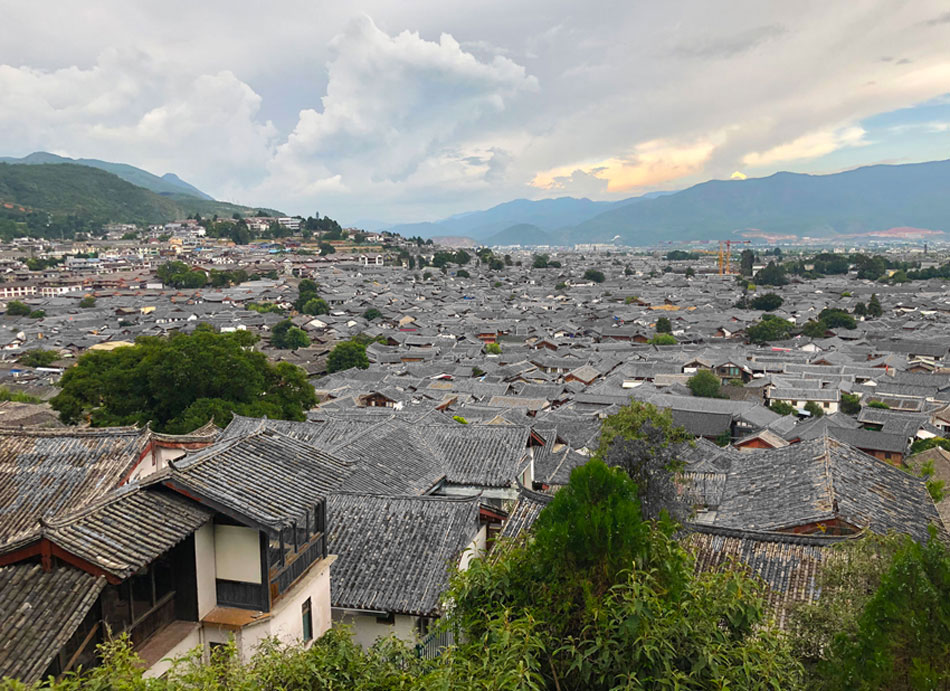 Designated a UNESCO World Heritage Site in 1997, Lijiang has vaulted to the number two position for the most beautiful ancient-styled town in China. It is the only Asian city in the world’s top 10 for clean air quality. In traditional Naxi society, women rule over all domestic affairs and family finances, yet despite such authority, most domestic and agricultural work are done by women. Preservation of nature is the central tenet in Naxi culture, fortified by its Dongba religion. Most striking among the guide’s remarks was his dislike for the majority Han Chinese. From experience he found them to be haughty and worst of all lacking respect for nature. He attributed their shortcomings to the absence of religion.

While in the area I came across the name of Joseph Rock several times so I visited Yuhu village, the site of his home and museum.* Rock was an Austro-American botanist and explorer who lived in the area on and off from 1922 to 1945. He posted reportages for National Geographic on the region’s floral richness and the minority peoples. His articles inspired author James Hilton to write Lost Horizon in which the mystical realm of Shangri-La was created. Decades later Rock’s articles offered inspiration for poet Ezra Pound’s seminal work, The Cantos. Several verses in the last of The Cantos describe the Naxi’s paradisiacal land of clear air, spring water, and luxuriant forests.

“And over Li Chiang, the snow range is turquoise

Rock’s world that he saved us for memory a thin trace in high air” (from Canto CXIII, Ezra Pound)

Here I am reminded of the importance of nature to the Naxi by a story my guide related. Every week he makes a trip to a natural spring to fill 36 liters of water for his grandmother’s weekly tea brewing and cooking habits. Then there was the day when I was soaked to the bones by a thrashing downpour as we toured the ancient village of Shuhe. The foul weather did not prevent him from leading me to the headwater, the source of the waters that run through the village. It was vital that I bear witness to it. The next day under cerulean skies, we returned to have a better look. Crystal indeed. 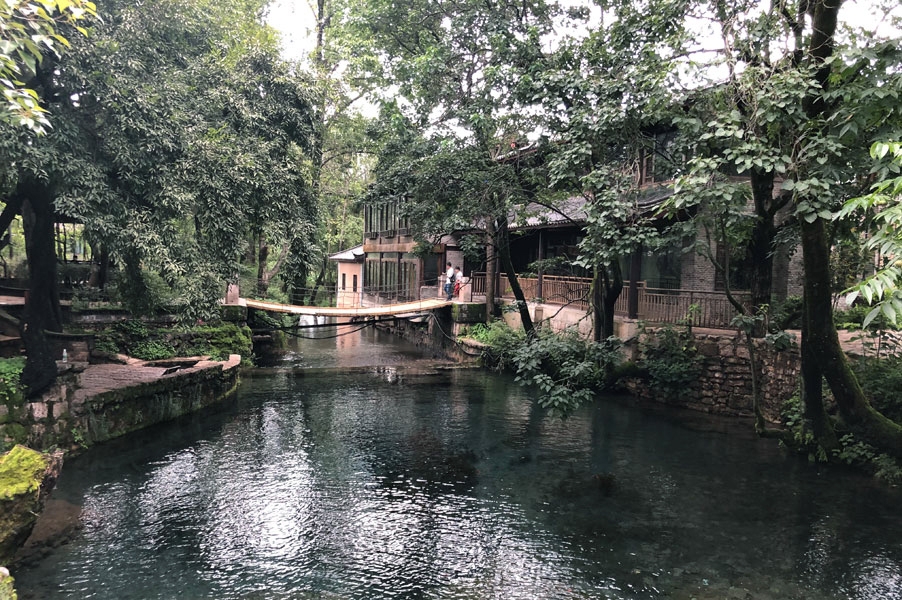 My final destination was further north in Zhongdian county where the altitude reached 3160 meters. In a cunning move to attract tourism, the name was changed in 2001 to Xiang Ge Li La, better known the world over by the legendary moniker, Shangri-La.

Since the publication of Lost Horizon in 1933, Shangri-La has been synonymous with any earthly paradise. There was no major Chinese translation of the novel until the early 1990s at which time the local government discovered the similarity of the mythical kingdom to the county of Zhongdian. Realizing they could attract foreign and domestic travelers to the region, the new name was designated.

Tibetans dominate the large number of ethnic groups in Shangri-La. In the newly developed northern end of town there are many outdoor outfitters catering to visitors who arrive to be challenged by the mountain trails. This part of town is constructed with new but traditional Tibetan style buildings that are square in shape with faux-painted timber beams under the roof. Hanging over many windows are the colorful cloth valences that flutter with the passing wind. 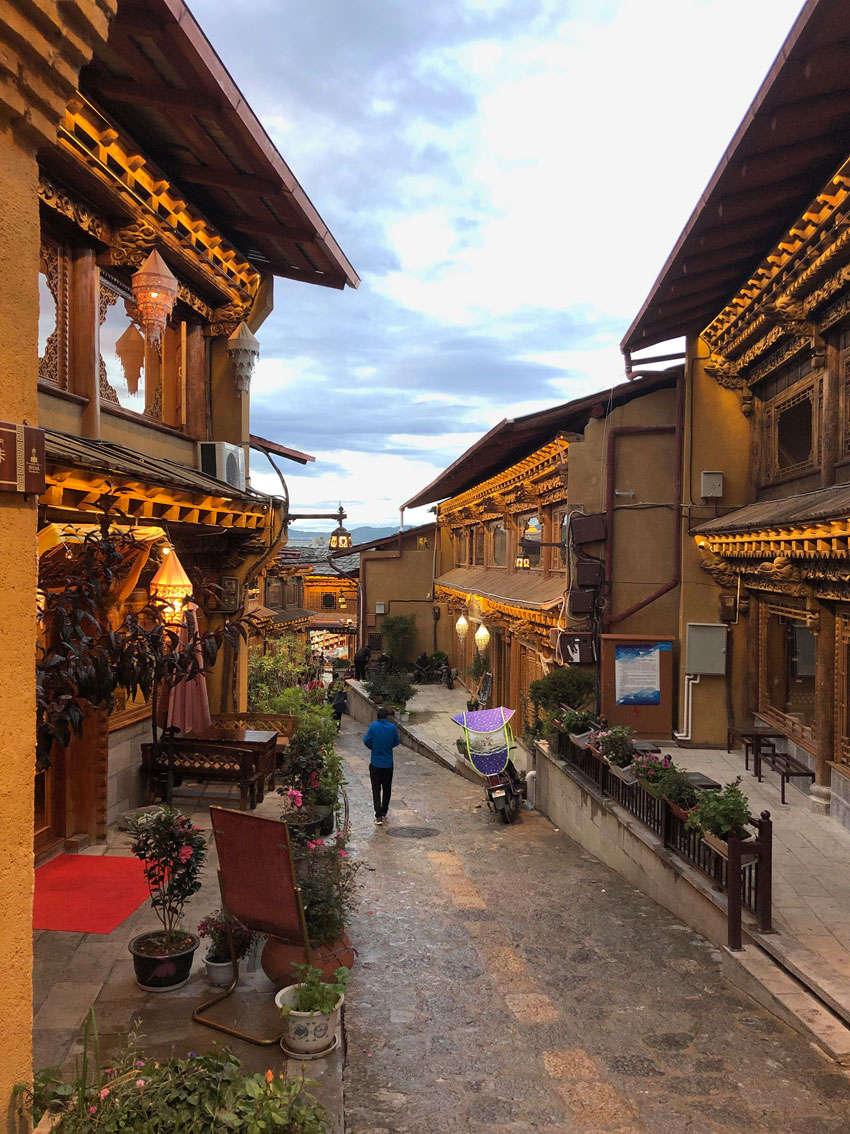 Outside the town farm animals – yaks, pigs, goats, chicken – wandered freely along roadsides grazing on grass. The ever present sylvan mountains were never out of view. Visiting Buddhist temples I learned to enter the sacred buildings from the left and circumambulate the halls clockwise. For the first time I turned the heavy wheels fulled with the prayers’ rolls. It was as if those prayers rose symbolically to the sky. As if they were said by me. 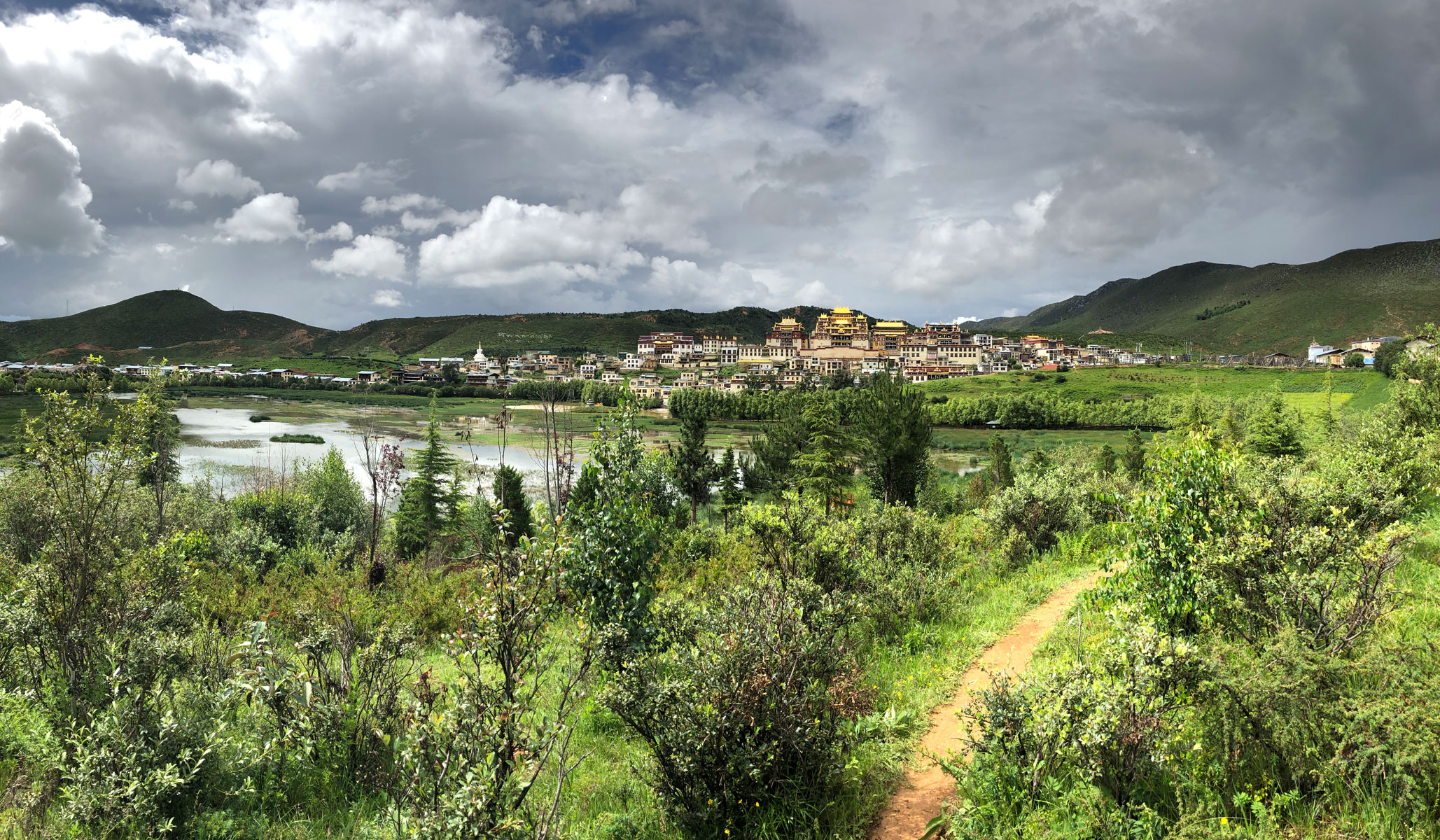 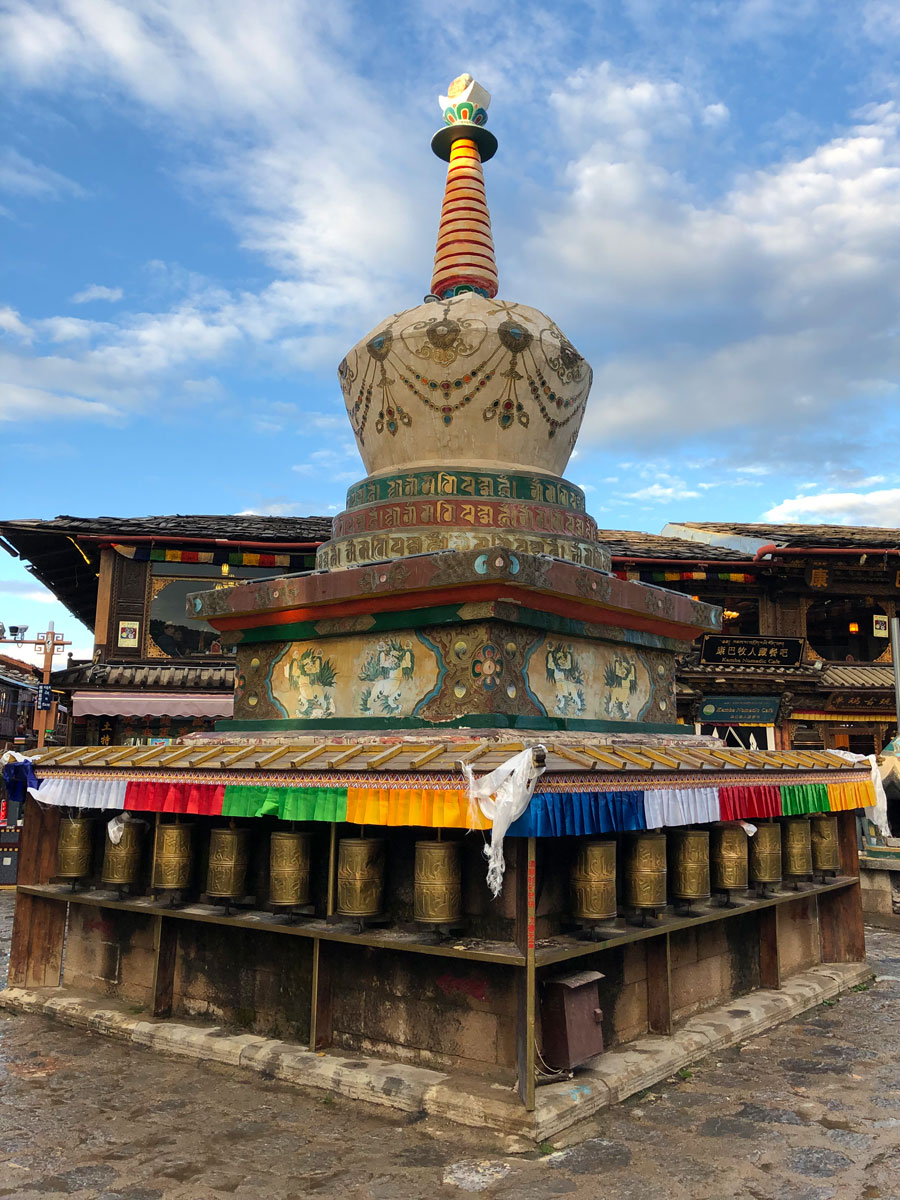 I ate yak meat sautéed with vegetables, sampled fried goat cheese that tasted slightly sweet; most dishes were heavily laden with dried chili peppers so I welcomed simple sautés of scrambled eggs and tomatoes. I drank buttered tea—definitely an acquired taste. In the early evening spirited music played in the main square, signaling the start of the daily circle dance. Locals and tourists alike took part in the spontaneous activity. It was easy to be inspired by the sweeping waft-like motions of the dancers.

The last stop before returning home was Hong Kong. By coincidence my hotel was the Shangri-La Kowloon. Every evening upon returning to the well-appointed room with a panoramic view of Hong Kong Island across Victoria Harbor, I would find a bookmark placed on my pillow with a short passage from Lost Horizon. Reading the passages reminded me that although I was no longer in the embrace of Shangri-La, the allure remained, lulling me into a restful slumber.

For over two weeks I had no obligations but to meet the local guide and follow the day’s agenda. The sensations experienced are being sorted; some will be discarded as were the “Artemisia arundinaria winnowed in fate’s tray” (from Canto CXII, Ezra Pound).

The gift of remarkable journeys. This one allowed unspoiled air and clear waters to linger long past the sojourn.