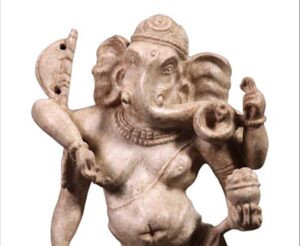 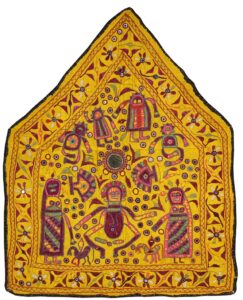 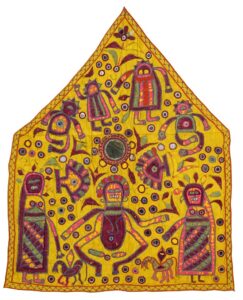 (see the catalog “From the Temple to the Court-Masterpieces of Indian Art, N. 95)

First half of 20th century

Embroidery on cotton with silk thread

(see the article “Ganesh Sthapana” in this site)

Both pieces represent Ganesh. The first one highlights the movement and lightness of a plump body that seems to rise, whilst in the embroidery the god-with-an-elephant-head (below) and the figures around him are abstract forms, as in an extraordinary childish drawing.

The sculpture is a work of art by an anonymous Indian artist of the Hindu-Shahi dynasty, which ruled a wide region between Afghanistan and India from the 6th to the 9th century, whilst the embroidery originates by the hands of a woman from Gujarat.

Is it not the same spirit to give life to the two Mother Goddesses and the figures on a tribal door from Orissa? The movement of the first two is more tranquil whilst the energy of the figures is more free and powerful. How wonderful is a culture which has been able to produce and preserve similar millenary forms of art, even though they are so different! 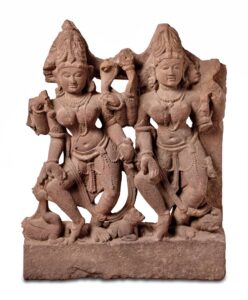 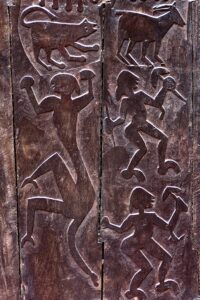 The two lovers (mithuna) are gazing at each other in an attitude of great adoration and languid sensuousness. Their bodies also, especially that of the woman, communicate: by the glance, by the breast that touch lightly the lover’s chest, by the hand that caresses his hip, by the relaxed legs. The amorous couple has elegant hairdos, refined jewels and thin clothes that emphasizes the perfection of their figures. The harmony of the relief depicts that of this human love which succeeds to convey the lovers from the earthly to the sacred world. 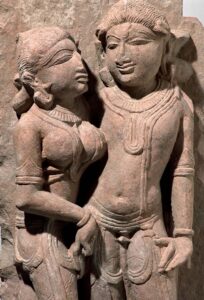 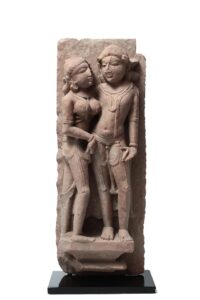 In the wooden panel Durga drugs the demon Mahisha and runs him through with her trident, her leg leaning on a tiger (her vehicle) that bites Mahisha. The large head of the invincible goddess prevails over the scene, depicted in an essential but powerful way.
In the stone panel Chamunda, one of the seven Mother Goddesses, dances on the body of a demon.
Both sculptures exalt the moment of the victory upon the Evil. In the wooden one, the forms are essential but absolutely powerful, whilst in the stone one, carved as it was a miniature, movement is elegant and harmonious. 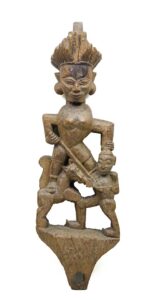 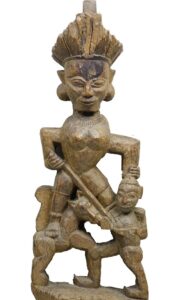 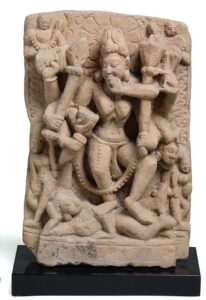 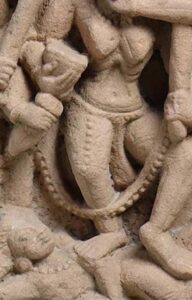 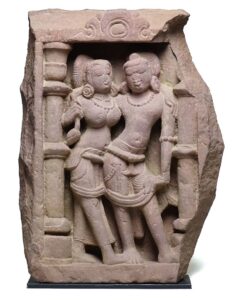 Who would ever tell that, as we see in many medieval sculptures, it was the woman too who expresses clearly love advances? We have to consider that, before the Islam and definitively before the English Puritanism, sex in India was certainly lived with a joyful and open spontaneity. Otherwise, how could the Kamasutra be written?
In this panel, the loving couple is situated between two pillars. The woman is hugging her lover, and seems to press him against her, her hand on his shoulder, resting her foot on one of her lover, a pose of deep complicity, while languidly caressing the stem of a lotus flower. Both the bodies are in the tribhanga posture, the “triple flexure” bending, the icon of Indian sculpture, that combines elegance and sensuality. 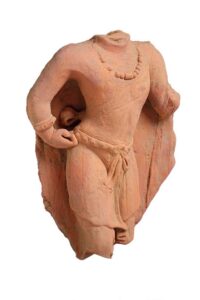 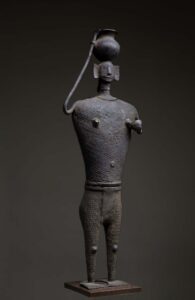 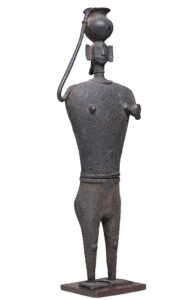 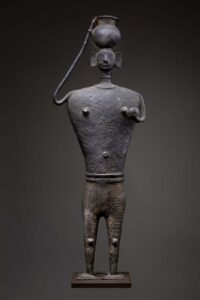 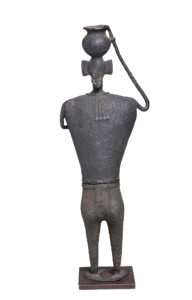