This spirited falconer is throwing his hunting bird in flight from his horse with such potent strength as seen by the dynamic twisting of his neck to the right.

The falconer’s phrygian cap, large aquiline nose, high cheekbones, thick eyebrows and the shawl-tunic identify him as a groom from Central Asia: the same foreign grooms with an Asian physiognomy who attended to the splendid steeds of the emperor or who traveled the Silk Road in search of exotic goods.

The size of the sculpture is remarkable. The bright white glaze is very refined, covering the entire sculpture except for, as usual, the base and the falconer’s head.

TEAPOT IN THE SHAPE OF A HARE

A fine small teapot of thin white porcelain representing a hare or rabbit. A double handle for pouring the hot tea would be fitted in the perforated fins on the back. Fourth animal in the zodiac, the hare / rabbit is an auspicious sign of longevity and of the Moon. During the Moon festival white hares are given to the children.

This unusual, original tripod is laterally held by two lions, the symbol of the King of  Nepal who is thought to be an incarnation of the god Vishnu. Between the lions is Garuda on a lotus leaf, the holy bird associated with Vishnu. The back support has the form of an ascetic handling a double-sided tambourine.

A tall eleven-headed hood of the cobra shelters the tripod’s contents, probably a flower or a specific ritual object.

The pixie rises on the rear legs while the front ones are bent on the chest ready to jump on the enemy and clutch it with its claws. The chest is bent to the right with a twist exalting its feline nature. The figure vibrates with irresistible energy; the expression is aggressive but this is the ferocity of the animal defending its master at all costs. On the back are big wings ready to unfold and give the pixie the force to defeat any danger.

Fantastic Chinese mythical hybrid creature, the Bixieis particularly auspicious for wealth because it devours exclusively silver, gold and precious stones for its master. Bixiecan also help those who are going through a bad year.

One of the nine sons of the dragon, theBixieis strong and elegant.  It has the body of a lion, the head of a dragon, stag horns (two antlers for female, one for male), feathered wings, sharp teeth, and a bifurcated tail.

Bixiestatues are often placed at the four corners of the roof of royal palaces and temples or, being a powerful protector of warriors, it appears on their flags.  Bixieis also carved on jade amulets.

Often confused with the chimera or theqilin, Bixiecan be distinguished by its pair of feathered wings with which it can fly about between Heaven and Earth.

At the centerof this triad is the god Vishnu in his duale form of Vishnu-Krishna, together with his two wives, Lakshmi-Rukmini (right) and Bhumidevi-Tatyabhama (left).

Vishnu’s rear arms hold the typical ritual shell and the wheel; however, in this case the form of Vishnu as the holy flute player Venugopala prevails. His hands play the transverse flute while his fingers seem to modulate a melody.

His body is in the triple-bending-posture (tribhanga)and his right leg is in front of the left one, as if the god was dancing. The sensation of movement is completed by the female figures who are also in the tribhangaposture.

Centuries of daily ritual handlings have smoothed these three small statues; thus, highlighting their sensuous shine and rendering a glossy, warm patina to the metal.

The stupa is the most ancient and important Buddhist monument and can be found – albeit in slightly different shapes – in all countries where Buddhism spread. Originally a reliquary for relics of enlightened persons, its structure has a cosmological and esoteric meaning. During the Pala Dynasty (the last before Buddhism’s disappearance from India) many stupas like this one were erected, probably commissioned by the faithful as ex-votos. Four aediculas stick out the circular body containing as many different forms of the Buddha, surrounded by one hundred small images of the Enlightened One. On the top is an umbrella consisting of six discs (one is missing here) of decreasing size. 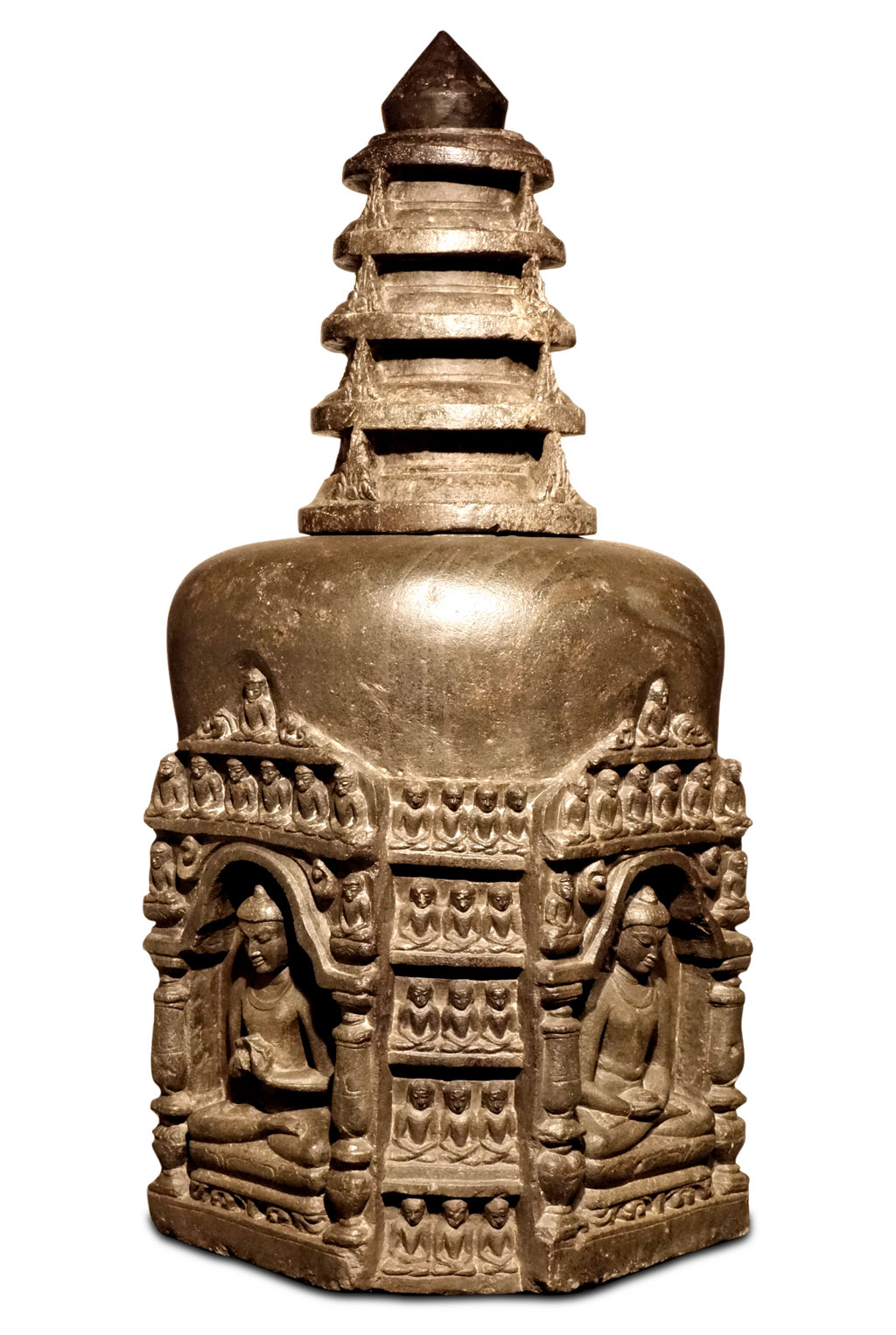 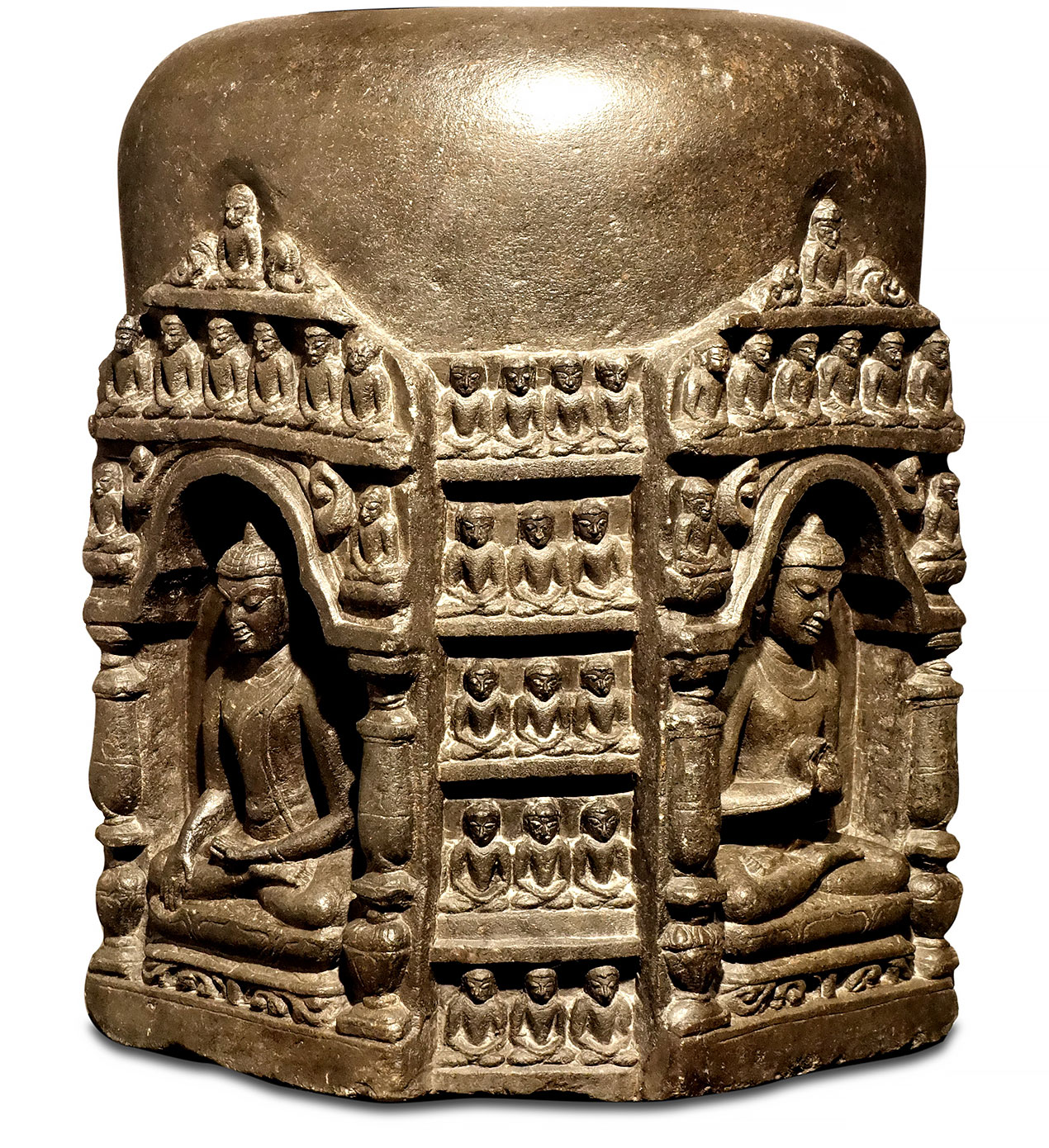